Update Required To play the media you will need to either update your browser to a recent version or update your Flash plugin.
By Pete Musto
11 November, 2018


A new study says the protective layer of the Earth's atmosphere is finally healing from damage by humans' use of harmful chemicals.

Aerosol sprays and coolants had been thinning the ozone layer since the 1970s. After scientists raised concerns about ozone-reducing chemicals, people and companies around the world stopped using them.

What is the ozone layer?

Ozone is a colorless combination of three oxygen atoms. The ozone layer starts at about 10 kilometers above Earth and stretches nearly 40 kilometers higher. The ozone layer is important because it protects Earth from the sun's ultraviolet rays, which cause skin cancer, crop damage and other problems. 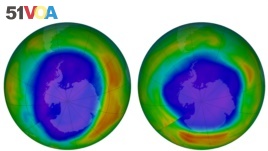 This combination of images made available by NASA shows areas of low ozone above Antarctica on September 2000, left, and September 2018. The purple and blue colors are where there is the least ozone

But man-made chemicals – called chlorofluorocarbons, or CFCs – can damage the ozone layer. In 1987, countries around the world agreed in the Montreal Protocol to end the use of CFCs over time.

What the study shows

The United Nations released a study on the effects of the decreased use of CFCs at a conference in Quito, Ecuador in early November.

Paul Newman is the chief Earth scientist at NASA's Goddard Space Flight Center and co-leader of the study. He told the Associated Press the findings are good news.

"If ozone-depleting substances had continued to increase, we would have seen huge effects," said Newman. "We stopped that."

Newman noted that, at its worst in the late 1990s, about 10 percent of the upper ozone layer was depleted. Since 2000, the ozone layer has increased by about 1 to 3 percent every ten years, the report said.

The hole reaches its largest size during September and October, when the Southern Hemisphere has its spring. The hole disappears by late December.

If nothing had been done to stop the thinning, the world would have destroyed two-thirds of its ozone layer by 2065, Newman said.

But the changes are not a complete success yet, said a University of Colorado atmospheric science professor. Brian Toon, who was not part of the report, pointed to some ozone measurements that have not increased yet.

"We are only at a point where recovery may have started," said Toon.

The report noted another problem: New technology has found that a banned CFC is being used in East Asia.

How has the hole in the ozone layer affected global warming?

On its own, the ozone hole has slightly helped protect Antarctica from the effects of global warming. Ross Salawitch is a University of Maryland atmospheric scientist who helped write the report. He said an undamaged ozone layer would actually trap greenhouse gases that cause global warming. Antarctica has heated up, but not as much as it likely would without the decrease of the ozone layer.

Salawitch said scientists do not know how much a healed ozone hole will continue to warm Antarctica. But they do know that decreasing the ozone layer would severely damage the world and human health. Not permitting the ozone layer to heal "would be incredibly irresponsible," he said.

NASA's Paul Newman points to another step humans can take: The chemicals that have replaced CFCs need to be replaced with chemicals that do not worsen global warming. An amendment to the Montreal Protocol that goes into effect next year would cut some of those gases.

"I don't think we can do a victory lap until 2060," Newman said. "That will be for our grandchildren to do."

Seth Borenstein reported this story for the Associated Press. Pete Musto adapted it for VOA Learning English. Kelly Jean Kelly was the editor. We want to hear from you. What else do you think the international community can or should do to help heal the ozone layer? Write to us in the Comments Section or on 51VOA.COM.

aerosol spray(s) – n. a substance that is kept in a container under pressure and that is released as a stream of very small drops when a button is pressed

coolant(s) – n. a liquid that is used to cool an engine or machine

ultraviolet ray(s) – n. rays of light that cannot be seen and that are slightly shorter than the rays of violet light

depleting – v. greatly reducing the amount of something

replace(d) – v. to be used instead of something

amendment – n. a change in the words or meaning of a law or document