Shah of Iran’s Countryside Home Is Now a Museum

Update Required To play the media you will need to either update your browser to a recent version or update your Flash plugin.
By George Grow
17 January, 2019


The shah of Iran's last home before fleeing his country in 1979 was a huge property in the Alborz Mountains — a place no Iranian ever dreamed of visiting.

Today, a visit costs them around $1.

The Niavaran Palace now welcomes the public to see the life the shah enjoyed as Iran's ruler for almost 40 years. Visitors can explore large, stately structures built on 11 hectares of land.

As Iranians remember Shah Mohammad Reza Pahlavi's ouster 40 years ago, Niavaran Palace has taken on even more meaning for those visiting and working there.

Jamal Shahosseini was once a young revolutionary who raided the Shah's home with other rebels.

"When you do something consciously and with an ideology, you go until the end, despite pressures," he said.

History of the Niavaran palace

The palace dates back to in the 1800s, when Iran's then ruling Qajar family decided to build a summer home on a mountainside. As Tehran grew during the 1960s, the next shah, Reza, and his family increasingly spent time outside the capital as political tensions against his rule grew. That included a failed 1965 attempt against his life by a member of his guard.

The royal family found safety at the palace. The shah's third wife, Queen Farah, had been a building design student. She spent millions of dollars on Niavaran. Part of one building had a collection of private artworks she had purchased. It was known as the Window to the World.

The shah would walk the grounds or speed along its roads in one of his many sports cars. The shah was also a pilot. He would fly helicopters in and out of the palace, staying off the streets as tensions rose.

All that spending, and reports of public money being misused helped to fuel anger against the shah and his family. From overseas, Ayatollah Ruhollah Khomeini called for a revolution.

As 1979 came, the pressure became intense for the shah, who at the time was secretly battling cancer that would eventually kill him in exile.

On January 16, 1979, he left the palace for the last time by helicopter, looking out over a Tehran he never would see again.

Four weeks later, protesters pushed past the remaining Imperial Guards at the palace. Among them was Shahosseini, now a 63-year-old guard at the museum. He remembers writing on the walls. Protesters wrote statements like "Viva Khomeini" and "Death to the Shah."

Once a countryside home, now a museum

Today, the museum's visitors can walk around the shah's former home and see the clothes and possessions he and his family left behind. In one room stands a human-shaped form wearing the shah's official uniform. Two paintings also still remain showing him and Queen Farah. 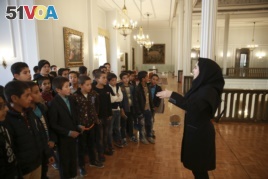 A museum guide Zeinab Sadat Asadi explains for schoolboys as they visit Niavaran Palace, now a museum, that was the primary and last residence of late shah.

Another building has some of the shah's many costly automobiles, including three Rolls-Royce and five Mercedes-Benz vehicles and six motorcycles.

For Fardin Asgari, a 28-year-old visitor born long after the revolution, the French look of the furniture was a sign that "the people viewed the shah as a dictator."

"They wanted to a have popular and elected government, not a dictatorship," he said.

Workers try to keep the property as it was when the shah left, including leaving Prince Alireza's room complete with its electric piano and pictures of naval warships attached to the walls. It can feel like a step back in time, a feel that some get even today as Iran faces new tensions with the United States.

"Today's pressures are for depriving us of our independence," Shahosseini said. "We did not have any independence under the shah's reign."

ideology – n. the set of ideas and beliefs of a group or political party

palace – n. the official home of a ruler; a large, stately building

consciously – adj. of or related to having knowledge of something

museum – n. a place where objects of artistic, cultural, historical or scientific interest are housed and shown to visitors

furniture – n. chairs, tables, beds, etc., that are used to make a room ready for use

view – v. to think about (someone or something) in a particular way