Short-lived Success Is a 'Flash in the Pan'

Update Required To play the media you will need to either update your browser to a recent version or update your Flash plugin.
By Anna Matteo
16 January 2021

On this program we take a closer look at common words and expressions in the English language.

Today we will talk about how to describe something that shows promise of being great, but then turns out to be...not so great. 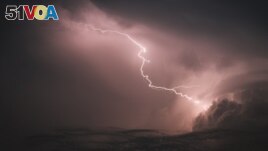 If something is a "flash in the pan," it not only comes quickly, but leaves quickly too. Pictured here, lightning flashes across the sky over Hanover, Germany, June 1, 2018. (AFP/DPA / Ole Spata)

We can call this a flash in the pan.

First, let's look at the words in this expression. A flash is a sudden burst of light or fire -- here one second and gone the next. And a pan is a kind of container usually used for cooking. But it has other meanings, too. We will talk about that later.

Sometimes we use the expression "flash in the pan" for things that seem to be going well. There is hope! But then, in the blink of an eye, things turn bad. In other words, things go from good to bad very quickly.

An artist or entertainer could be described as a flash in the pan if their success happens quickly but does not last long. If a singer is a flash in the pan, we could also call him or her a one-hit-wonder. This expression describes an artist who has only one popular, or hit, song and then disappears from the spotlight.

Here is another example of how to use flash in the pan:

I thought that my new boss was going to be here for a long time. But she was just a flash in the pan. Here today, gone tomorrow.

Word experts say "flash in the pan" probably comes from an old kind of firearm called a musket. These weapons were used during the 16th to 17th century. But to understand the origin of this expression, we have to understand how a musket fired.

Other times things went wrong in this chain reaction. For example, sometimes the charge in the pan would light but would fail to light the main charge.

The gun would not fire. When this misfire happened, people called it a "flash in the pan."

And misfires were common. Through time, the expression "flash in the pan" soon became used to describe other things.

And that's the end of this Words and Their Stories. Until next time, I'm Anna Matteo.

gunpowder – n. an explosive mixture of potassium nitrate, charcoal, and sulfur used in gunnery and blasting

flint – n. a massive hard dark quartz that produces a spark when struck by steel