Update Required To play the media you will need to either update your browser to a recent version or update your Flash plugin.
By Anne Ball
30 September, 2016


Here is another reason to not light up a cigarette.

Smoking can permanently damage your genetic material, according to a new study.

Researchers at the Hebrew SeniorLife Institute for Aging Research say smoking leaves a long-term "footprint" on a person's DNA or deoxyribonucleic acid. The researchers have ties to Harvard Medical School in the American state of Massachusetts.

DNA is the genetic material of which all living things are formed. Health problems, like heart disease and cancer, are believed to be at least partly a result of damage to a person's DNA.

The changes in the genes are a result of a natural process called "DNA methylation." It changes how the DNA works or operates, and possibly affects the body's natural defenses against disease.

Roby Joehanes is the first author of a report on the study. He said the researchers found ‘compelling evidence' that smoking has a long-lasting influence on our ‘molecular machinery.' 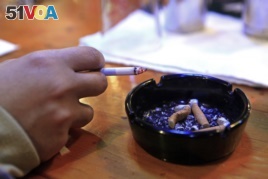 "The encouraging news is that once you stop smoking, the majority of DNA methylation signals return to never smoker levels after five years, which means your body is trying to heal itself of the harmful impacts of tobacco smoking," he said.

However, cigarette smoking can still have an influence on people's health more than 30 years after they stopped smoking, he said.

The researchers studied blood samples from 16,000 people, smokers and non-smokers alike. They found that for most, DNA damage resulting from smoking slowly disappeared five years after people quit smoking.

But some of the damage appeared to be permanent.

Researchers said in the study, the smokers experienced changes to more than 7,000 genes. That is about one-third of known human genes. 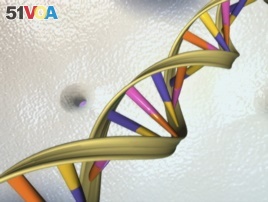 A DNA double helix is seen in an undated artist's illustration released by the National Human Genome Research Institute to Reuters on May 15, 2012.

DNA methylation is one of the ways genes are expressed, or show up, in the body. It affects which genes ‘turn on' and that can lead to the development of smoking-related diseases, said Dr. Stephanie J. London. She works at the U. S. National Institutes of Health and was another author of the study.

"Equally important is our finding that even after someone stops smoking, we still see the effects of smoking on their DNA," she said.

Smoking is the leading cause of preventable health disorders. It kills an estimated 480,000 Americans every year, according to the Centers for Disease Control and Prevention.

Smoking is believed to cause more than 6 million deaths worldwide each year, mostly through cancer, heart disease and lung disease.

Campaigns to get people to give up smoking have seen some success in the United States. Smoking levels have dropped. Now only an estimated 15 percent of the adult population smokes.

The study was published in the American Heart Association journal, Circulation: Cardiovascular Genetics.

This report was based on a story from VOANews. Anne Ball adapted it for Learning English. George Grow was the editor.

compelling – adj. very interesting and able to hold your attention

methylation – n. the process in which certain chemicals called "methyl groups" are added to proteins, DNA and other molecules

author – n. someone who is a writer