Update Required To play the media you will need to either update your browser to a recent version or update your Flash plugin.
By Christopher Jones-Cruise
29 September, 2016


An international team of scientists has identified a new kind of "superbug" -- or strong bacteria -- that has made people sick.

They link the development of the superbug to the use of antibiotic drugs in farm animals.

The scientists say this new strain of Methicillin-resistant Staphylococcus aureus -- known as MRSA – sickened at least 10 people in Denmark. They said the bacteria is resistant to several antibiotics and can kill chickens. 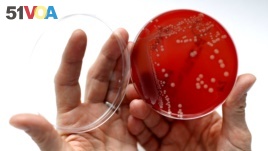 A culture of Methicillin-resistant Staphylococcus aureus grows in a petri dish. Researchers have found a new strain of the bacteria that resists drugs.

This strain is not found in Denmark. The researchers believe the Danes likely got sick from it by eating or being close to imported chicken.

Most people do not get MRSA from animals used as food. The bacteria usually spreads through person-to-person contact in hospitals or other buildings where people live in small, crowded spaces. Farm workers have a higher risk of staph infections.

The researchers compared the strains of MRSA in the 10 Danes to staph infections in other people and in livestock. They found the strain came from poultry -- animals like chickens and turkeys.

The contaminated meat in Denmark was imported from other countries, including France, the Netherlands and Germany.

The findings were published in the journal Clinical Infectious Diseases. They show that this strain of the virus may be more-easily passed from meat to people.

Last week, the United Nations held a high-level meeting of experts on antibiotic resistance. They talked about how resistance could become an international crisis if steps are not taken.

Laura MacCleery was at the meeting. She works for the Washington, D.C.-based Consumers Union. She says animals that are raised on farms for food are often given antibiotics to prevent disease and help them grow faster.

She said, "Drug pricing and availability at a level of provider incentives -- those are the kinds of things that governments can do to discourage inappropriate prescribing among physicians, and to educate consumers about the potential risk of antibiotic resistance."

MacCleery says her organization has persuaded restaurants like McDonald's to agree not to sell chicken treated with antibiotics.

sub-therapeutic doses –n. less than the required amount of a medicine

incentives –n. something that encourages someone to carry out some action

prescribe –v. to officially tell someone to use a medicine or treatment to get better