Some in US Not Ready to Give Up Face Masks

Update Required To play the media you will need to either update your browser to a recent version or update your Flash plugin.
By Anna Matteo
31 May 2021

More than 120 million Americans are now vaccinated against the new coronavirus. Local officials across the United States are easing social distancing. And many are dropping measures that require people to wear nose and mouth covers, or masks.

However, not everyone in the country is ready to surrender their mask. They have become the most common and visible COVID-19 control measure.

The United States Centers for Disease Control and Prevention, CDC, said recently fully vaccinated people no longer need to socially distance themselves. It also advised that this group can safely go without a mask in any outdoor activity and during some indoor events as well. 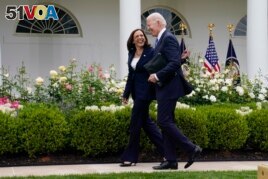 President Joe Biden walks with Vice President Kamala Harris after speaking on updated guidance on face mask mandates and COVID-19 response, in the Rose Garden of the White House, Thursday, May 13, 2021, in Washington. (AP Photo/Evan Vucci)

A fully vaccinated person is two weeks past their final shot of a COVID-19 vaccine. Partly vaccinated or unvaccinated people, the health agency said, should continue wearing masks.

The guidance still calls for masks in crowded indoor settings including hospitals, prisons, airplanes and buses. But it clears the way to reopening workplaces, schools and other places that closed during the pandemic.

Rules and guidelines aside, people may not be emotionally ready to give up their masks -- especially after wearing them for a year. Others are more than ready to throw the face coverings in the waste container.

The Associated Press talked with people across the U.S. about their thoughts on masks.

First, let's hear from Jan Massie. She is a retired teacher and lives in the southern state of Alabama. Now fully vaccinated, Massie does not have to wear a mask. Yet she does, even as temperatures rise in her home state.

She said, "I've worn a mask where it really wasn't required."

Why? She said wearing a face mask helped to protect her from infectious diseases in general. She not only avoided COVID-19 but also the flu and her usual yearly colds.

Massie said she has not faced any criticism for wearing a mask in public. But other Americans report that they have.

The spread of COVID-19 is slowing in the U.S. Almost 40 percent of the population is fully vaccinated. The CDC reports the disease has killed about 585,000 Americans. So, millions of people are deciding whether to continue wearing face masks. Others ignored, rejected or disputed CDC guidance on face covers from the start.

Denise Duckworth is among that group.

"I've always been against masks, and I think all their rules have been hypocritical, and they've been confusing," said Duckworth.

Duckworth spoke during a visit to New Orleans, Louisiana, where she walked mask-free in the popular French Quarter neighborhood. Many other people on the streets were also maskless.

But some Americans remain concerned that the current vaccines may not protect against new, and future, versions of the virus.

Alex Bodell of Ithaca, New York, is one of them.

The fully vaccinated man was visiting New Orleans at the same time as Duckworth. But unlike her, he wore a mask in public.

He told the Associated Press that he felt more comfortable and was able to enjoy himself more being fully vaccinated and wearing a mask.

In Fargo, North Dakota, a college student went maskless during an outdoor event. Andrew Kodet said he has been vaccinated and will follow the CDC guidelines.

"If you've been vaccinated and you've put the effort into it to avoid spreading the disease, it's about time to begin this rebuilding process," said the 20-year-old Kodet.

Near Boston in Cambridge, Massachusetts, Vanessa Li spoke with the AP when she was not yet past the two-week point of her second vaccine shot. So, she still wears her mask outside, especially when around many people. Li said that she has been slow to take off the mask because "it's been such a habit."

The 25-year-old is an epidemiologist, a scientist who studies disease spread. She noted the different versions of the virus and risk levels around the world. As international travel returns to normal, she is not "sure how at risk everyone is at the moment."

Justin Lawrence wears a mask while making a drink at the coffee place he owns in San Francisco, California. Lawrence said he must obey local rules and they require mask wearing in indoor public spaces.

"It puts small businesses in the place of having to police people all over again. And you can't tell by looking at somebody that they've been vaccinated," he said.

New York City resident Raquel Mitchell recovered from COVID-19 in December. She is firm in her refusal of vaccination. She told the AP the treatments were developed too quickly to be trustworthy. Mitchell always wears a mask in public. When will she stop?

"I don't know. Never," said Mitchell. "It's going to be really difficult for me."

Jay Reeves reported this for the Associated Press. Anna Matteo adapted it for VOA Learning English. Caty Weaver was the editor.

visible – adj. able to be seen : easily seen or understood

hypocritical – adj. acting in contradiction to his or her stated beliefs or feelings

confusing – adj. something uncertain or unable to understand

habit – n. a way of acting or doing that has become fixed by being repeated often