'Speaking Up' to Prevent Child Marriage in Bangladesh

Update Required To play the media you will need to either update your browser to a recent version or update your Flash plugin.
By Phil Dierking
17 September, 2018


In Bangladesh, two-thirds of all girls are married before the age of 18.

Getting married at an early age takes away some of their childhood. It also affects the girls' right to an education.

A not-for-profit organization is trying to change that by providing educational support through an effort called the Girls Education Program. The group, called Speak Up for the Poor, has offices in the United States.

The support is coming from everyday U.S. citizens, like a mother and her 9-year-old daughter from Maryland.

When Sasha Forbes heard the founder of Speak Up for the Poor, she was moved by the group's cause.

Speak Up for the Poor

Speak Up for the Poor does a lot of work in Bangladesh, one of the world's poorest countries.

Troy Anderson is the founder and international director of Speak Up for the Poor.

"So, in Bangladesh, the major problem there is child marriage, where up to two-thirds of the girls are married before the age of 18," Anderson said. "And quite a lot of those are getting married when they're 13 or 14 years old. So, we're working on the preventative side to keep girls in school so that they won't be forced into legal marriages when they're young." 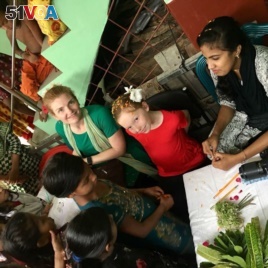 Sasha Forbes and her 9-year-old daughter Maya visit a new village being served by the Girls Education Program in Khulna, Bangladesh, April, 2018.

The Girls Education Program provides support to girls from 30 villages in rural Bangladesh. It pays for books, school supplies and educational programs outside of normal school hours. About 1,300 girls are registered in the program, with hundreds more on the waiting list.

The girls depend on the donations of families to help them finish school. For the past year, the Forbes have supported a 12-year-old girl in Khulna, the third largest city in Bangladesh.

Sasha Forbes said she decided to take her 9-year-old daughter Maya to Bangladesh to visit the girl they were helping.

"I wanted her to be able to relate with a young girl on the other side of the world. And to get that perspective and know that not everybody lives the type of life or experience that we have. And then also I wanted her to know that if she felt passionate about something and she wanted to make a difference or volunteer that it's very possible."

For two weeks, the mother and daughter from Maryland volunteered their time and worked in several villages in Khulna. They spent time with the girl they supported, visited classrooms, brought presents and school supplies and taught English to young girls.

Maya says the time spent in Bangladesh taught her an important lesson.

After returning to the U.S., the Forbes continued to "speak up for the poor." They raised money through yard sales, workout programs, and even selling drinks like lemonade. They hope to bring the money they collected to Bangladesh in November.

Their efforts have moved others like Wendy Zanders to support their cause.

"I may not be able to, you know, pack up my bags, take time off from work and go to Bangladesh, but because she had that passion to do so, we can support her financially, or whatever it is that she needs."

With the help of groups like Speak Up for the Poor, Forbes and her daughter Maya are making a difference in the lives of many. Through their efforts, many more young girls are getting the chance to learn so they can follow their own paths to success.

Vina Mubtadi reported this story for VOANews. Phil Dierking adapted the story for Learning English. George Grow was the editor.

bag - n. a container made of thin material (such as paper, plastic, or cloth) that opens at the top and is used for holding or carrying things

lemonade - n. a drink made usually of lemon juice, sugar, and water

lesson - n. an activity that you do in order to learn something

passionate - adj. having, showing, or expressing strong emotions or beliefs

perspective - n. a way of thinking about and understanding something (such as a particular issue or life in general)