Update Required To play the media you will need to either update your browser to a recent version or update your Flash plugin.
By Patrick Merentie
12 August, 2016


Every summer artists perform at Fringe Festivals around the world.

Fringe Festivals are a celebration of strange art. They have all kinds of performers -- from dancers, musicians and actors to everything in between.

The shows give artists, sometimes described as outside the norm, a chance to create unusual art. For festival goers, each show is a time to experience something different. 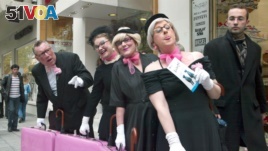 Street entertainers from the Edinburgh Fringe Festival perform in the northern Greek city of Thessaloniki.

The first Fringe Festival was held in Edinburgh, Scotland in 1947. That was also the year of the first Edinburgh International Festival.

Artists from around the world traveled to Scotland for the Edinburgh International Festival. They performed at arts centers throughout the city. Eight local theater companies did not receive an invitation, however. In response, they performed at smaller spaces around Edinburgh. These artists performed wherever they could, including churches and even on the street. They started their own cultural event and named it the Edinburgh Festival Fringe.

What started as an alternative to the mainstream has now become the world's largest arts festival.

Today, there are hundreds of Fringe Festivals taking place around the world. Ksenia Vidyaykina performs as a 1920's era strip tease dancer who takes off her cloths, and then her skin in a portion of "Trapped," a one woman performance at the New York International Fringe Festival.

The one in Washington, D.C., called the Capitol Fringe Festival, is in its tenth year. It was held in the month of July.

Julianne Brienza founded the Capital Fringe Festival. She went to a school for the performing arts, but now sees herself mainly as an organizer of the festival.

Brienza believes that fringe performance art is special and can have a powerful effect.

"We live here in D.C, the nation's capital where there are a lot of large federally funded institutions," she says. "So to have a festival about people outside of that system is pretty awesome...it's a good message to local people being important."

The Capital Fringe Festival takes place in different locations throughout the D.C. area. Some performances happen in traditional theaters. Others happen in unusual settings like old, empty buildings or stores after business hours are over. 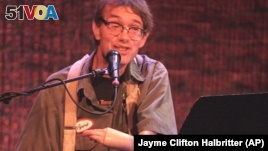 Kevin Kling debuted his new monologue, "Baseball, Dogs and Motorcycles," at the Hey City Theater in Minneapolis, Minn., as part of the Fringe Festival.

Brienza says the purpose of Fringe festivals is to explore the limits of art in unique environments.

Since 2006, the event has made more than $1.7 million. It is the second largest unjuried Fringe Festival in the U.S. and its popularity has grown every year.

Rachel Turner is the founder of the Errant Movement dance group. Its show, called "Connectivity/Complexity," used dance and music to ask questions about human relationships in the age of social media. Turner believes that attending one Capital Fringe show motivates audience members to see other performances at the festival.

"I think it really brings people together. For people who don't necessarily see a lot of performances all the time...it motivates them to see artwork," she says. "I think it's good for the artists but it's really good for people in the city to get out and see more work."

Leah Harris was a Fringe participant for the first time this year. She performed her one-woman show, called "Aliens, Nazis & Angels." In it, she tells the story of her life, her mother and other members of her family in a series of funny and sometimes sad anecdotes.

Actor Tom McCarthy performs in "The Philly Fan" at the Philadelphia Fringe Festival.

Harris believes that the festival can help many artists take a risk.

"The impact it has personally is that seeing some of these other one person shows, makes me think that, hey I can do that...I can do this in my own little way and there's a space for me," she says.

The Edinburgh Festival Fringe continues throughout the month of August.

Patrick Merentie reported on this story for VOA Learning English. George Grow was the editor.

setting(s) – n. the place and conditions in which something happens or exists

unjuried – adj. art exhibition or festival is one where all submissions are accepted

motivate(s) – v. to give someone a reason for doing something

participant – n. a person who is involved in an activity or event

anecdote(s) – n. a short story about an interesting or funny event or occurrence