Update Required To play the media you will need to either update your browser to a recent version or update your Flash plugin.
By Hai Do
14 July, 2016

In interviews with media organizations in the past week, Ginsburg criticized the presumptive Republican nominee for president. She said she did not want to think about the possibility of Trump winning the election. She also called Trump a "faker."

Trump asked the justice to resign from her position. On social media, he criticized her comment as, in his words, "dumb." He tweeted, "Her mind is shot – resign."

Republicans and some newspaper editorial writers were critical of the Justice's comments.

Both The New York Times and The Washington Post wrote editorials saying she should stay out of presidential politics. 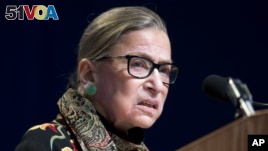 Justice Ginsburg seemed to agree with the criticism.

In a statement released by the court's public information office, she said: "Judges should avoid commenting on a candidate for public office. In the future, I will be more circumspect."

Ginsburg has served on the Supreme Court since 1993. President Bill Clinton, a Democrat, appointed her. At the time, she was only the second woman appointed to the U.S. Supreme Court.

At 83, she is the oldest member of the court. Ginsburg is known for speaking out on many issues. Her comments are often reported in blogs and were even turned into a book.

Reporters question Josh Earnest about her criticism of Trump on Wednesday. The president's spokesman said, "She didn't earn the nickname the 'Notorious RBG' for nothing."

presumptive –adj. considered to be, but not yet officially confirmed

circumspect –adj. thinking carefully about possible risks before doing or saying something