Update Required To play the media you will need to either update your browser to a recent version or update your Flash plugin.
By June Simms
16 September, 2012

The Paralympic Games in London have been called the "greatest Paralympic Games ever." International Paralympic Committee President Sir Phillip Craven made the statement to a crowd at the games' closing ceremony earlier this month. He said the athletic event had found its pathway to the future.

Paralympic athletes were not the only ones making news this year. The attention was also on improvements in technology that helped those men and women compete. 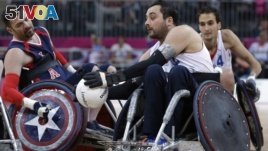 Jason Regier, left, of the United States goes for the ball with Nicholas Rioux of France
Engineers David Sheffield and Doug Watt volunteer for a charity group called Remap. It designs technology to help disabled people.

The two engineers are designing a wheelchair for Shot Put thrower Shaun Sewell. He lost the use of his legs thirteen years ago in a motorcycle accident. David Sheffield predicts the new wheelchair design will be used as a model for future athletes.

DAVID SHEFFIELD: "We were asked to make a chair which was totally adjustable in every way so that we could then use it not only just for Shaun but for other athletes. And then we could find the exact correct positions for the way they sit, the way they hold the pole, the way they lean back and so on."

The engineers took all of Shaun Sewell's measurements so that the chair was perfectly designed for his body. They also spent time watching him throw, to see how his body moves and where extra support was needed.

Shaun Sewell almost went to the Paralympic Games in Beijing in two thousand eight. But, he was unable to compete because of a life-threatening infection. He hopes to attend the twenty-sixteen games in Rio de Janiero. And he says the new wheelchair could help him get there.

SHAUN SEWELL: "I believe it's going to make a huge difference. I'm throwing really well with the frame that I have now, which is not right for me. So to have something right is only going to help improve my distance."

Peter Parry is chairman of the trustees at Remap. He says its volunteers built devices for three of the athletes at the Paralympic Games in London. He says there are many rules about what technology is permitted.

PETER PARRY: "We can help them support themselves. We can provide them with the pole to help them balance their body. But what we can't do is have things like springs or hydraulics also, which would give them an unfair advantage. Because then it becomes a battle of who can make the best device rather than who is the best athlete."

Jason Regier is a wheelchair rugby player. He helped the American team win a bronze medal in London. He says his team's members have the same goals as any other athlete.

JASON REGIER: "I would say most of the Paralympic athletes just want to be treated as athletes. And it's not about just going 'oh, this is my poor situation,' it's about what you can do, not what you can't do."