Tesla Says It Will Accept Bitcoins for Car Payment

Update Required To play the media you will need to either update your browser to a recent version or update your Flash plugin.
By Hai Do
08 February 2021


American carmaker Tesla said on Monday that it had invested around $1.5 billion in bitcoin, an internet-based form of money.

The company is expected to begin accepting the digital currency as payment for its cars and other products in the near future. The announcement from one of the best-known American car companies sent the price of bitcoin up more than 10 percent.

Tesla chief Elon Musk is a supporter of the digital currency. In recent weeks, Musk used the social media website Twitter to praise bitcoin. Musk said a week ago that bitcoin was "on the verge" of being more widely accepted by investors. Last December, he asked if it was possible to do large business deals in the currency. 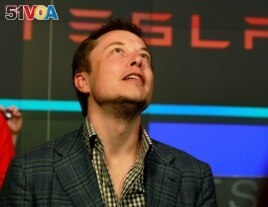 Eric Turner is a vice president of market intelligence at the research company Messari. He says more companies will use bitcoin now since "Tesla has made the first move."

He told Reuters, "One of the largest companies in the world now owns Bitcoin and by extension, every investor that owns Tesla (or even just an S&P 500 fund) has exposure to it as well."

The value of a Bitcoin has reached record highs in recent months. The currency has also gained support from major financial companies this year. The financial services company Blackrock recently permitted some of its funds to invest in the currency. However, government-run central banks around the world do not support the digital currency.

Tesla said in a document sent to the U.S. Securities and Exchange Commission (SEC) early Monday that its $1.5 billion investment in digital currency and other "alternative" holdings may grow.

Neil Wilson is a market expert for Markets.com. He said of Tesla's Elon Musk, "He's now putting his money (shareholders') where his mouth is." He warned, "But given his recent comments – and adding #Bitcoin to his Twitter bio on January 29th – it also raises a real question about possible market manipulation."

In 2018, Musk was fined $20 million by the SEC for charges of wrongdoing related to his use of social media. Recently, Musk was involved in driving up the share prices of U.S. video game seller GameStop.

While more companies have used the technology behind bitcoin, known as blockchain, the actual uses of bitcoin have not changed very much. Some businesses, such as Overstock.com, have accepted payments in bitcoin. Still, its popularity is low compared with normal currencies.

Many individuals and businesses will not accept bitcoins for payments. But that could change if others follow Tesla and begin accepting the digital currency.

Hai Do wrote this report for VOA Learning English with additional reporting from Reuters. Mario Ritter Jr. was the editor.

digital currency –n. money that is recorded and held electronically on computers, bitcoin is one example

exposure –n. (financial) the amount of risk involved in holding a financial position in some investment

fund –n. (financial) an amount of money and investments from many different people and groups that is managed by financial experts

alternative –adj. not usual or traditional, outside of the normal

manipulation –n. to influence or control something in a clever or unfair way