Update Required To play the media you will need to either update your browser to a recent version or update your Flash plugin.
By Phil Dierking
06 July, 2017

The government was forced to delay the start of the law after protests and panic from workers and employers. Also, many migrant workers have left the country.

There are about 2.7 million workers in Thailand from Myanmar, Laos, and Cambodia. They work in industries such as fisheries, building, agriculture, and processing. 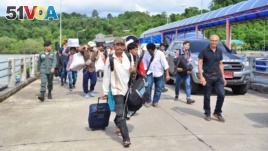 A group of Myanmar migrant workers cross the border between Thailand and Myanmar near the Thai port city of Ranong, July 3, 2017.

However, on June 23, the government announced a decree that threatened foreign workers who lacked legal documents with large fines and prison terms.

The new policy is part of the Thai government's effort to control illegal labor in the country. However the law came with very little public discussion from workers, trade unions, or employers.

This caused foreign workers to panic. Many rushed to return home, creating crowds at bus stations and border checkpoints.

Sinapan Samydorai is with the Migrant Workers Task Force of the Association of Southeast Asian Nations, or ASEAN. He said thousands of migrant workers had fled to their home countries. Thai labor rights groups estimate that more than 100,000 migrant workers have left Thailand since June 23.

Samydorai told VOA that the law punishes foreign workers who lack the correct cards and documents. He said this caused many workers to panic and return to their homes in Cambodia, Myanmar, and Laos in large numbers.

Thai Prime Minister Prayut Chan-o-cha announced on Tuesday that there would be a period of 180 days before the law goes into effect. The Prime Minister used a special executive decree to delay the law.

Panitan Wattanayagorn is an advisor to Deputy Prime Minister. He said parts of the new law protected migrant and employer rights. However, it also established "very strict punishment for violations."

He also urged related government agencies to work together to help the law take effect.

"The implementation of it [the decree] has to be coordinated between different ministries, between the Labor Ministry, the Ministry of Foreign Affairs and Ministry of Interior," he told VOA.

The decree has hurt Thai businesses as employees have either fled or lost their jobs because employers fear high fines.

In Cambodia, officials shut down more than 40 border crossings into Thailand. They said it was to prevent Cambodians from entering Thailand and being punished.

On the border with Myanmar, two police checkpoints were closed after Thai police were accused of taking bribes from migrant workers.

Boonthai Chailert is president of the Chiang Mai Tourism Business Association. He said the laws created problems for small businesses and tourism in the Northern provinces. His fear is that workers will not return.

"They go out; they go back to Myanmar, or to Cambodia or to Laos. They don't come back again because in Myanmar and Cambodia or Laos their country is developing," said Boonthai.

A business leader said he thought the new government policy was a mistake.

The importance of consultation and coordination

Thailand has been working with the U.N. International Labor Organization, or ILO, to create a registration process for migrant workers. The process will include labor agreements with Cambodia, Myanmar and Laos.

Nilim Baruah, an ILO research specialist, said that parts of the law were welcomed, but the lack of consultation was a problem.

"It would have been much better to have a consultation, a public hearing that they are planning to do now," he said.

Thailand put the new labor law in place shortly after the U.S. Department of State kept the nation in the tier 2 group of countries on its Trafficking in Persons watch list. Tier 2 countries are judged to have governments that do not fully meet requirements of a U.S. law on human trafficking.

Ron Corben reported this story for VOANews. Phil Dierking adapted her report for Learning English. Mario Ritter was the editor.

What do you think is a good labor policy for migrant workers? We want to hear from you. Write to us in the Comments Section or on 51VOA.COM.

decree - n. an official order given by a person with power or by a government

panic - n. a state or feeling of extreme fear that makes someone unable to act or think normally

scramble - n. to move or act quickly to do, find, or get something often before someone else does

union - n. an organization of workers formed to protect the rights and interests of its members