How US Lawmakers Get Involved in Immigration Cases

Update Required To play the media you will need to either update your browser to a recent version or update your Flash plugin.
By Christopher Jones-Cruise
02 July, 2017


The United States government may force Gurmukh Singh to leave the country.

Singh works as a taxi driver in Southern California. The government denied his request for asylum 18 years ago. Since then, he has been trying to persuade U.S. immigration officials to overturn the expulsion order.

The Immigration and Customs Enforcement agency, or ICE detained Singh in early May. His wife and two daughters are American citizens. 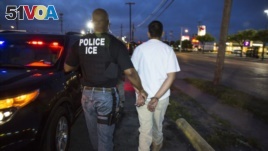 Alan Lowenthal represents a part of Southern California in the U.S. House of Representatives. Shortly after Singh's detention, Lowenthal offered a private immigration bill to the House for consideration. If approved, the measure would give Singh the legal right to stay in the country.

However, the Trump administration recently changed the way immigration officials deal with such cases.

What is a private bill?

Private bills are pieces of legislation that create a law that affects only one person or a small group of people. Private bills can stop a law from affecting someone, provide special help, or remove legal responsibility for some wrongful act.

Often, members of Congress write private bills to help people who been unsuccessful in dealing with the U.S. immigration system.

How often does this happen?

Private bills are rare. Between 1986 and 2013, Congress approved such measures just 94 times.

Jill Marie Bussey is the director of the Catholic Legal Immigration Network. She says about 300 private bills have been proposed in Congress since 2010. That number could fall because of changes in the way ICE deals with private bill cases.

What are the changes to private bills?

Until last month, ICE delayed expulsions of undocumented immigrants named in private bills in Congress. The agency says there were about 70 such cases over the past six years.

But in May, ICE told Congress it would only delay expulsions for up to six months -- and only after receiving a written request from the chair of the House and Senate judiciary committee or one of their subcommittees.

ICE says most private bills are designed to give people permanent resident status by "circumventing the normal immigration law network."

Bussey says that private bills are only used when there is no other way to resolve the immigration case under current law.

"This is not about circumventing," she says. "This is about providing protection in very unique ways."

Robert Law is the director of government relations at the Federation for American Immigration Reform. He said the changes will help make the process fairer.

But some members of Congress believe the changes give too much power to the president.

Can members of Congress intervene at all?

Members of Congress can also have an influence on immigration cases in other ways. Bussey says members can contact a local ICE office, or the State Department, when a case involves visa issues.

That is how Florida Representative Charlie Crist, a Democrat, was able to help the Huynh family. They are friends of his family and operate a jewelry store in his state.

Crist told VOA that he entered the store a few months ago and saw that Mrs. Huynh was sad.

"She was telling me about her daughter Kim who had gotten married a year prior and yet her husband wasn't allowed to come to Vietnam to be with her in America," he said.

Crist began to work with Florida Senator Marco Rubio, who was already making telephone calls about the case to the State Department. State Department workers met with Kim's husband at his home in Vietnam. They saw a photograph of the lawmaker and asked if he was a family friend.

Three days later, Kim's husband was given a visa.

What role can Congress play?

Immigration powers are divided between Congress and the president. Finding a balance between them often means looking for areas where one of them has done something they are not permitted to do.

Law says "there needs to be (a) clear line about what the letter of the law is and if there are problems with the law, then we have a legislative process to fix it."

Bussey says that when members of Congress get personally involved in immigration cases they learn more about what is happening in federal agencies and "what people are facing day to day and hopefully they can learn from that."

expel – v. to officially force (someone) to leave a place or organization

circumvent – v. to avoid being stopped by (something, such as a law or rule); to get around (something) in a clever and sometimes dishonest way

trample – v. to treat other people's rights, wishes or feelings as if they are worthless or not important

practice – n. the action of doing or using something

error – n. something that is not correct; a wrong action or statement

stuff – n. informal used to speak in a general way about something that is talked about, written about, etc.

allow – v. to permit (something)

letter of the law – expression the specific meaning of a law