Update Required To play the media you will need to either update your browser to a recent version or update your Flash plugin.
By Christopher Jones-Cruise
27 June, 2017

The award is often called the Nobel Prize for food and agriculture.

Adesina has worked for many years to increase food production in Nigeria. He has increased access to credit for small farmers, and influenced agricultural policies throughout Africa. 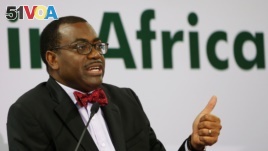 FILE - African Development Bank (AfDB) President Akinwumi Adesina gestures as he addresses a news conference at the annual meeting of AfDB in Gandhinagar, India, May 22, 2017.

"I believe that what Africa does with agriculture and how it does it is not only important for Africa, but it's important for how we're going to feed the world by 2050, because 65 percent of all the uncultivated arable land left in the world is in Africa," Adesina said. "To help Africa get it right in agriculture is also going to be a key part of securing food for the world."

"When I look at Africa today, I see that many rural areas unfortunately have become zones of economic misery," Adesina told the Reuters news agency.

The African Development Bank chief is the son of a Nigerian farm worker. He worked his way out of poverty through education. He was able to go to college after his father was chosen for a government job. The young man continued his studies in the United States. He earned graduate degrees in agricultural economics from Purdue University.

Adesina said agriculture has the greatest chance to improve lives in areas that are suffering. But he said investments are needed to make young people want to become farmers. He noted that many young people risk their lives by leaving Africa for Europe in search of work.

Adesina said he often thinks of the hundreds of millions of young, rural Africans whose chances for economic success are limited.

key – n. something that is necessary in order to do or achieve something

cool – adj. appealing in a way that is generally approved of especially by young people

mission – n. a task that you consider to be a very important duty