US Military: Islamic State Problem 'Not Getting Better' in Afghanistan

Update Required To play the media you will need to either update your browser to a recent version or update your Flash plugin.
By John Russell
24 June, 2017


In 2001, the United States invaded Afghanistan. Since that time, the U.S. military has lost lives and spent large amounts of money in an attempt to stop armed groups.

Dana White is the chief spokesperson for the U.S. Defense Department. She spoke to VOA for her first filmed interview. 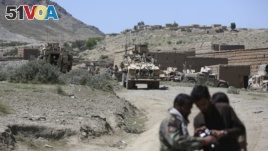 U.S. forces and Afghan commandos are seen in Asad Khil near the site of a U.S. bombing in the Achin district of Jalalabad, east of Kabul, Afghanistan, April 17, 2017. (AP Photo/Rahmat Gul)

White said the Islamic State problem in Afghanistan is "not getting better."

White said that the Secretary of Defense, James Mattis, is still learning about what U.S. army leaders need on the ground.

Some officials have said that the military will likely increase the number of forces for operations against al-Qaida and Islamic State in Afghanistan. White said that Mattis will speak to NATO counterparts in Brussels next week before making a final decision on a plan.

On Thursday, a car bomb explosion in Afghanistan's Helmand province killed at least 34 people and wounded more than 60 others.

The suicide attack came ahead of Sunday's Eid festival, which marks the end of the Islamic holy month of Ramadan.

Witnesses said soldiers and government employees were waiting outside of a bank to collect their salaries when the bomber struck.

The Taliban claimed responsibility. Mohammad Yousaf Ahmadi, a Taliban spokesperson, said the bombing happened on a day when the bank does not permit civilians to enter.

Omar Zwak, a local government spokesperson, said that civilian and military personnel were among the victims.

This attack comes one day after other Taliban activity.

American Kevin King and Australian Timothy Weeks were teachers with the American University of Afghanistan in Kabul. They were kidnapped last August.

"My captors treat me well. They treat me and my colleague Tim Weeks as their guests; but, every prisoner's final wish is to get freedom from the prison," said King.

The video's release comes at a time when Afghan officials are reportedly planning to execute a group of Taliban prisoners. They were found guilty of terrorism.

The Taliban wants these prisoners freed in return for letting the two hostages go.

The U.S. State Department declined to give comments on the video.

U.S. General John Nicholson is the top commander in Afghanistan. In February, he told the Senate Armed Services Committee that he needs "a few thousand" more troops to complete his mission of supporting Afghan forces.

The extent to which a new military troop increase will take place – and if it will have success against Afghanistan's insurgent groups – remains unclear.

Carla Babb and Ayaz Gul wrote versions of this story for VOA News. John Russell adapted them for Learning English. Caty Weaver was the editor.

focused – adj. giving attention and effort to a specific task or goal

counterpart – n. someone or something that has the same job or purpose as another

salary – n. an amount of money that an employee is paid each year, usually divided into equal amounts and paid once every two weeks or once every month.

colleague – n. a person who works with you: a fellow worker

decline – v. to say that you will not or cannot do something

insurgent – n. a person who fights against an established government or authority