Tourism in Caribbean, Florida Likely to Suffer After Hurricane Irma

Update Required To play the media you will need to either update your browser to a recent version or update your Flash plugin.
By Bryan Lynn
13 September, 2017


Hurricane Irma caused severe damage to some Caribbean islands and the American state of Florida.

These places depend heavily on tourism to fuel their economies.

The area had been preparing for an increase in visitors from the United States and Europe ahead of the upcoming high tourist season. But instead of foreign visitors, many local governments are struggling just to provide their people with food, water and other needed supplies. In some areas, shortages caused unrest and looting.

Among the hardest hit areas was the independent island nation of Antigua and Barbuda. Officials there reported about 95 percent of buildings were either destroyed or severely damaged. 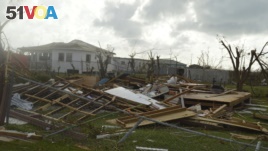 Also hard hit was St. Martin, which is split between French and Dutch territories. Witnesses on the island said most buildings were flattened by Irma. Similar damage reports came from the French island of St. Barthelemy and the British and U.S. Virgin Islands.

Tourism is important to Caribbean islands. In 2016, the Caribbean set a record for the most visitors ever with 29 million tourist arrivals, according to the Caribbean Tourism Organization. The total amount spent by those visitors rose to nearly $36 billion in 2016, the organization said.

But there has seen severe damage to airports, roads and buildings on many islands. It is not known how much rebuilding can be completed before the high tourist season arrives in December.

Hundreds of tourists trapped by the storm have been evacuated from the area. The U.S. military has helped with evacuations and the United Nations has provided emergency supplies by air. Cruise ship companies have even sent ships to disaster areas to help evacuate people and carry supplies.

Gabriel Torres is an expert for Moody's Investors Service who has studied the economic effects of storms in the Caribbean area. He told the Associated Press that companies with better disaster insurance will be able to rebuild more quickly.

"It has an impact on tourism because some hotels will decide not to rebuild or take a long time to rebuild, and that's lost revenue," Torres said. "That can take years to recover."

Torres added that St. Martin will also benefit from aid money from France and the Netherlands to help with rebuilding. He said it will likely be more difficult for Antigua and Barbuda, which became independent from Britain in 1981.

Antigua and Barbuda's ambassador in Washington, Ronald Sanders, told VOA his country is prepared to "fight on" and rebuild the best it can on its own. But he also hopes the country will receive aid from other sources. Sanders said he plans to organize a conference of possible donors to discuss rebuilding.

Some travel experts have noted that some of the Caribbean came away with little damage from the storm, including the popular islands of Aruba, Bonaire and Curacao. They will be trying to get the message out that tourists should not cancel their visits.

In Florida, Irma devastated one of the state's most popular tourist areas, the Florida Keys. The Keys were the hardest-hit area by the storm in the U.S. Officials there say it is too early to estimate financial losses from Irma.

U.S. National Guard troops are in the area carrying out rescue operations. They have also been working to clear roads and airport runways to ease the delivery of lifesaving supplies.

The head of the Federal Emergency Management Agency, or FEMA, Brock Long, said the Florida Keys suffered a lot of damage. He said early estimates say that 25 percent of homes were destroyed and 65 percent suffered major damage.

high tourist season – n. the time of year when an area popular with tourists is at its busiest

loot – v. steal things from a place during war or after major destruction has occurred

insurance – n. agreement in which you pay a company money and they pay your costs if you have an accident, injury, etc.