A Story for Halloween: 'Innocence Burned'

Update Required To play the media you will need to either update your browser to a recent version or update your Flash plugin.
By Caty Weaver
28 October, 2012

From VOA Learning English, welcome to THIS IS AMERICA in Special English.

On Halloween, children dress in costumes and collect candy from their neighbors. At each house the little zombies, princesses and superheroes yell "trick or treat!" Halloween, October thirty-first, is also a time for scary stories. For the fourth year in a row, our own Caty Weaver has written an original horror story. It's called "Innocence Burned." Here is Christopher Cruise.

It was raining again. It always seemed to be raining in Sephul County. The people rarely enjoyed a blue sky. The sky was usually gray, like ash. And it was a big sky that hung like a huge ash-colored dome over the open prairie land. 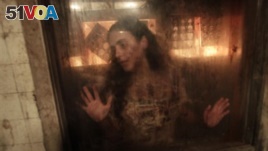 Halloween Story: 'Innocence Burned'
Carrie Thead was walking home. Her husband, Caleb, and two sons, Sam and Stuart, were waiting for her. She was passing the ruins of a chapel. The building had burned a long time ago -- a long, long time ago, back in the seventeen hundreds. What remained of it now leaned sideways. The angle was such that it made you dizzy to look at. It bothered her that the county government just left it there – dark and hollow. A shadow of a holy place.

Carrie shivered and walked even faster. For some reason it always felt a little hard to breathe when she passed the blackened ruins of the chapel. It was like the structure had sucked in all the air around it.

Six people had died in the fire. Six others were badly burned but survived. Another six escaped without a single injury. But they suffered in a different way. A heavy wooden beam had fallen in their way. They could not help their friends and loved ones escape the fire. They were an audience to horror.

And it stayed with them the rest of their lives. None of the six "untouched" survivors ever spoke again. The tragedy had struck them mute.

A few people had seen the bolt of lightning hit the chapel. But there was no storm, no thunder. The lightning came from out of a blue sky.

So people blamed the fire on a fifteen-year-old girl named Charlotte Reed. Two years earlier, her little village of Lenfer had accused her of witchery. Her parents disowned her. Her friends turned against her. The village expelled her in every way but physically. She began to walk through the streets, talking to herself in a language no one recognized. Her eyes always turned to the ground.

The eighteen villagers had gathered in the chapel for a community meeting that day. They had to decide how to deal with the Charlotte Reed. They had just voted in favor of executing the "little witch" by fire when the unexpected lightning struck.

Carrie turned to look back at the chapel. A shadow moved inside the ruins. Carrie slowly stepped forward for a better look. "No one goes in there," she thought.

Then she heard a quiet voice say, "We must attend to the condemned."

Carrie spun around on her heels. "Who's there?"

The sky opened suddenly and rain poured down. "What in the world? Where'd this storm come from?"

Suddenly, there was a flash of lightning. It made the hairs stand up on Carrie's arms. "Way too close, I could be killed out here. I gotta' get inside."

She ran as fast as she could toward the chapel.

Carrie went into the broken building. She moved toward the back where there was still some roof that could protect her from the storm.

But, halfway to the back, she stopped. She noticed some shapes in the darkness. It looked like a small group of people crouched low to the ground. She could see them. She could also see through them. Carrie screamed.

Suddenly she was thrown through the air. She landed on her back meters from the chapel. Her head hit the ground. She was knocked unconscious.

Carrie heard Sam's voice but couldn't see him or answer. "Where am I?" she thought. Her head hurt. Her mind was filled with visions of fire and people crowded together. All she could feel was fear.

"What's wrong with her, Stu? Why can't she answer? Where is the ambulance?"

"But where did the blisters come from Stuart? Look at her feet. What is happening?"

Sam was crying. Stuart grabbed hold of his little brother and held him close.

Carrie wanted to cry. All she wanted to do was speak to her boys. To see them.

She could hear a siren in the distance -- emergency help was on the way.

But then Carrie felt something grab her under her arms. She felt like she was being dragged along the ground. Then other hands picked up her legs and she felt herself being carried away, away from her boys.

She had no idea where she was being taken. She again tried to call out. She struggled to kick whoever was carrying her, but her hands and feet were tied with ropes. She heard whispers.

Then a horrible, screeching laugh filled the air. "Give her to me," the voice said. "I condemn her soul to the fire."

Carrie's eyes opened. Her hands and feet were tied. Flames leapt up near her. "What's happening to me?" she screamed. She saw a crowd gathered around the fire.

"You are condemned to the fire for the fire you began. The fire will cleanse you and set you free. You must die for those you murdered."

The voices fell into a moaning and groaning call.

The emergency medical technicians arrived as Sam and Stuart were bent over their mother. One of the EMTs asked Stuart:

"We don't know. She didn't come home. We came looking for her. We found her here, on the chapel field."

Sam spoke up. "It doesn't make sense. She hates this place. It spooks her. And why are her clothes and hair wet? Everything else is dry." He patted the grass around his mother. "And look at her feet."

The EMT began chest compressions on Carrie to try to bring her back to life. Then he shouted to the boys.

"Check the chapel. See if you can find out what happened in there. Maybe it'll help me know what to do."

The two brothers entered the building slowly and quietly. "What is that smell, Stu? It smells like a bonfire."

"Something horrible happened here, Sam. Something shameful. Can you feel it?"

As he spoke the remaining chapel walls began to creak. The building shook. "Hurry, Stu, let's get out of here!"

They got out of the chapel just before it collapsed. Every piece of it shattered as if it had been crushed. The dust blew up toward the sky. And the sun came out from behind the clouds.

The boys heard their mother coughing. They ran to her. The two EMTs smiled. "She'll be OK, guys. She's breathing now. It looks like she was overcome by smoke."

But the other EMT look puzzled. "Isn't it weird, though, that this happened here?" he said.

"Don't you kids know where we are? This is the place where there was a horrible fire hundreds of years ago. Some people blamed a teenager named Charlotte Reed for starting it. They said she caused a bolt of lightning to strike the chapel. So to punish her they threw her into the burning building. Can you imagine that?"

Stuart listened as he leaned over his mother. She was moving her lips but there was no sound. "What happened, Mommy? What happened to you?"

Carrie opened her eyes and looked at her son's face. Her eyes had a wild look of fear. She tried to smile.

And she never spoke again.

I'm June Simms. You can find an MP3 and transcript of our story, along with links to our other Halloween stories, at 51voa.com. Join us again next week for THIS IS AMERICA in VOA Special English.
Related Articles
go top