Update Required To play the media you will need to either update your browser to a recent version or update your Flash plugin.
By Jim Dresbach
27 April, 2016

Donald Trump, a billionaire businessman, won a majority of votes for the Republican Party in all five states. Hillary Clinton, the former secretary of state, won a majority for the Democratic Party in four states. The two candidates are close to claiming their parties' nominations for president.

The other major challengers for the nominations -- Senator Bernie Sanders, Senator Ted Cruz, and former governor John Kasich -- said their campaigns will continue. 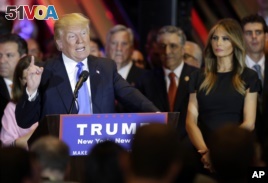 The state primary elections influence the number of delegates who will support the candidates at the party conventions this summer. Clinton and Trump have both built large leads in delegate counts.

On the Democratic Party side, Clinton has a total of 2,141 delegates. A candidate needs 2,383 to claim the Democratic Party nomination. Her challenger, Bernie Sanders, told the Associated Press he has a "very narrow path and we are going to have to win some big victories."

The race for the Republican Party nomination has Trump with 950 delegates. Cruz and Kasich are trying to stop Trump from reaching the 1,237 delegate total for victory. If Trump cannot reach that total, the Republican nominee for president could be decided at the GOP convention.

Exit polls taken Tuesday show division in the Republican Party, according to an Associated Press report. Only about 40 percent of GOP voters in Pennsylvania said they are excited about Trump being president.

In the same poll, close to 60 percent said this year's Republican Party primary campaign has damaged the party.

Many polls have asked respondents whom they would choose in a contest between Trump and Clinton. Polls in the last month show Clinton winning by close to nine percent, according to a VOA news article.

But Trump says he welcomes the opportunity to oppose Clinton in the general election in November.

"When I'm one-on-one with Hillary she will be, as I said, easier to take down, much easier to beat than many of the people I've already beaten," Trump told supporters Tuesday.

The candidates now are campaigning in the state of Indiana. The Indiana primary will be held May 3.

Who do you think would win in America's general election in November? We want to hear from you. Write to us in the Comments Section or visit our 51VOA.COM.

billionaire – n. a rich person who has at least a billion dollars

Democratic Party – n. a political party in the United States that is usually considered more liberal

primary elections – n. elections in which members of the same political party run against each other for the chance to be in a larger and more important election

Republican Party – n. a political party in the United States that is usually considered more conservative

exit poll – n. a method of predicting the result of an election by asking people questions as they leave the place where they voted