Update Required To play the media you will need to either update your browser to a recent version or update your Flash plugin.
By Anne Ball
10 February 2020


United Nations agencies warn that the widespread custom of female genital mutilation comes at a big cost, both in human and economic terms. U.N. officials are calling for an end to the practice by 2030.

Also known at FGM, female genital mutilation is the act of cutting and/or removing part or all of a female's external genitalia. It can also include other injuries to the female genitals.

FGM is mostly carried out on girls, from when they are very young to the age of 15.

The World Health Organization, WHO, says around 200 million girls and women alive today are suffering the physical and psychological effects of FGM. Most live in one of 30 countries in Africa, the Middle East and Asia where FGM is often performed. 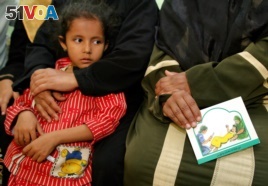 A woman holds a card in her lap about the problems with female genital mutilation (FGM) during a session to educate women in Minia, Egypt June 13, 2006.

FGM has no medical benefits, only damaging results. That is what Monica Ferro told VOA. Ferro is the director of the U.N. Population Fund's office in Geneva, Switzerland. She told VOA that women and girls who have undergone the practice suffer long-term physical and psychological harm.

"It often leads to bleeding, to infections, to infertility" and other problems that last a lifetime. These can include urine infections, problems while giving birth, and "sometimes it even leads to death," Ferro said.

Even with these risks, the practice has continued largely in the name of culture and tradition. Some communities believe FGM helps prevent sex before marriage. They also believe it helps make sure a woman will not cheat on her husband because it reduces her desire for sex.

In addition to the physical and emotional price paid by the girls and women, there is also an economic cost.

A new report by WHO estimates that medical care necessitated by FGM costs about $1.4 billion a year. For some countries, the costs are nearly 10 percent of total health care spending every year. In a few nations, WHO officials say, the number is as high as 30 percent.

Ferro said an estimated 61 million girls will be cut between now and 2030 in countries where FGM is widespread. But she noted progress in the areas and countries where U.N. agencies are working to end the practice.

Ferro added that the countries with the highest amount of FGM are also countries with high population growth. So, while the actual number of girls at risk is higher than before, the rate is improving.

People working to end the practice say that support for FGM is shrinking. In countries where FGM is widespread, girls between the ages of 15 and 19 are less supportive of the practice than women aged 45 to 49. They say that young people can play an important role in halting the custom.

Many places have passed laws against the practice—including 26 countries in Africa and the Middle East. Enforcing the laws can be difficult, however, and the result may be that the practice is now done in secret.

"For the last 20 years, we have a law against the practice in this country," said Amadou Moreau, founder of Global Research and Advocacy Group. The a Senegal-based nonprofit works to end FGM. Moreau added, "It's the most controversial law in this country. Because, when you're dealing with people's faith and beliefs and culture and tradition, executive order has no place to guide people on how they should behave, how they should act."

Experts say the most effective solutions is using both grassroots efforts and policy change. They say that a powerful way to bring about change is to show people that others have stopped the practice and have seen improvements in the well-being among their girls.

Lisa Schlein and Annika Hammerschlag wrote stories on this topic for VOA. Anne Ball adapted their stories with additional information from the WHO. The editor was George Grow.

Is FGM practiced in your country? What do you think of this story? Write to us in the comments section below.

genital mutilation – n. the action of cutting or damaging genitals, or sex organs

practice – n. something that is done often or regularly

external – adj. belonging to or forming the outer surface of something

benefit – n. a gain or profit

urine – n. waste liquid that collects in the bladder before leaving the body

grassroots – n. the ordinary people in a society or organization : the people who do not have a lot of money and power