Update Required To play the media you will need to either update your browser to a recent version or update your Flash plugin.
By Anna Matteo
06 May, 2019


A new report from the United Nations says human activity is threatening the survival of up to 1 million species of animals and plants. Many, the report says, will disappear within decades. This would be more than ever before in human history.

The U.N.'s Intergovernmental Science-Policy Platform on Biodiversity and Ecosystem Services, or IPBES, released the report on May 6 in Paris.

British chemist Robert Watson is the IPBES chairperson. In a statement he said the misuse of resources by humans is not only killing plants and animals, it is also destroying, "the very foundations of our economies, livelihoods, food security, health, and quality of life worldwide."

The IPBES says the document is the first intergovernmental report of its kind and "the most comprehensive ever completed." It involved 450 experts from 50 countries. The team examined about 15,000 scientific and governmental sources. 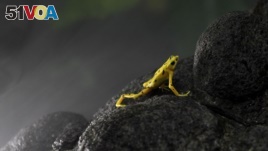 The Golden frog (Atelopus zeteki) is one of Panama's national symbols. It is listed by wildlife organizations as "critically endangered."

To increase the importance of these findings in deciding governmental policies, the report listed five things humanity is doing that have had the largest worldwide effect so far.

In order, they are:

Professor Josef Settele of Germany co-chaired the IPBES effort. He says in the press statement, "This loss is a direct result of human activity and constitutes a direct threat to human well-being in all regions of the world."

The report found that city areas have more than doubled since 1992. It also found that "more than a third of the world's land surface and nearly 75% of freshwater resources are now devoted to crop or livestock production." And in 2015, 33% of marine fish stocks were being harvested at unsustainable levels.

Robert Watson also spoke with National Geographic about the report. He said his "biggest personal concern is the state of the oceans." He added that with "plastics, dead zones, overfishing, acidification... We're really screwing up the oceans in a big way."

The report also details the relationship between economic development and its effects on nature.

Rebecca Shaw is a chief scientist at World Wildlife Fund and another expert who worked on the report.

She spoke about it with Here and Now, an American radio show. She said the report details the human-caused destruction of ecosystems. She said the goal of the report is not just to protect other species of animals, but humans as well.

Humans depend on healthy ecosystems for food and medicine. As Professor Settele noted in the statement, the "interconnected web of life on Earth is getting smaller and increasingly disconnected." Human life is not outside of these endangered ecosystems, but dependent on them.

The report adds that it is not too late to make changes but they must be massive changes. It says all parts of government -- from agriculture, forestry, marine and freshwater systems to city areas, energy and finance – need to work together to make the difference.

And we must act, IPBES chair Robert Watson wrote in an opinion piece for the Guardian.

"We simply cannot afford the cost of inaction. Change of the magnitude required will mean a different life for everyone, but the costs of doing nothing will be much higher," he wrote.

Anna Matteo wrote this story. Caty Weaver was the editor.

foundation – n. a basis (such as a tenet, principle, or axiom) upon which something stands or is supported

devote – v. to set apart for a special purpose

unsustainable – adj. not capable of being prolonged or continued

acidification – n. technical : to cause (something) to become acidic

screwing up phrasal verb : make a mistake or error