Update Required To play the media you will need to either update your browser to a recent version or update your Flash plugin.
By Olivia Liu
31 May, 2017


The United Nations humanitarian chief says Yemen has the largest food crisis in the world.

Stephen O'Brien told the U.N. Security Council this week that more than 17 million people in Yemen struggle every day to find enough food to eat. He warned that 7 million of them are "one step away from famine."

Yemen's civil war started more than two years ago. Government forces are fighting Houthi rebels. O'Brien noted that the food crisis is man-made. He blamed the conflict for famine, disease and death.

The fighting has affected food production, especially agriculture and fishing. Food prices have increased. One in four Yemenis cannot pay for food from local markets. 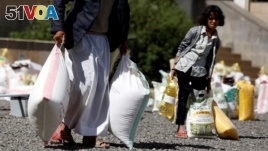 A young woman carries food received from a local charity during the holy month of Ramadan in Sanaa, Yemen, May 29, 2017.

Gulf Arab supporters of the government have blocked Yemen's main port. The blockade has slowed delivery of humanitarian aid and fuel.

Yemenis are at risk of getting infected with diseases because of the famine. Currently, Yemen is trying to keep cholera from spreading. O'Brien said that cholera has affected an estimated 60,000 people and killed 500 people. He said it may cause another 150,000 cases over the next six months.

O'Brien said the civil war is responsible for the latest outbreak of cholera. He praised the United Nations and its humanitarian partners because they are trying to contain the spread of the disease.

In addition, less than 45 percent of Yemen's medical centers are operational.

And the end of the conflict is not in sight.

Ahmed said that the main parties are not willing to accept or discuss compromises that are needed for peace. He said their unwillingness is "extremely troubling."

Ahmed said that he failed to get an agreement to stop an attack on the Red Sea port of Hodeidah. The port is the main entry point for fuel and humanitarian aid.

Also, over one million government workers have not received wages in months. That has forced families into poverty. It has added to Yemen's economic crisis.

The special envoy has not escaped the violence. His vehicle was attacked in Sana'a while traveling from the airport to the U.N.'s offices. U.N. officials have called for an investigation into the incident.

Olivia Liu adapted this story for Learning English. George Grow was the editor.

famine – n. an extreme lack of food; a great shortage of food

party – n. a person or group taking part in an action