Uneven Signs of Growth in the Transport Industry

Update Required To play the media you will need to either update your browser to a recent version or update your Flash plugin.
By VOA
06 September, 2012

A look at some industries in the United States shows that the economic recovery is somewhat uneven. And growth seems to be slowing down. VOA's Jim Randle spoke with experts in the transportation industry, which is easily affected by economic changes. 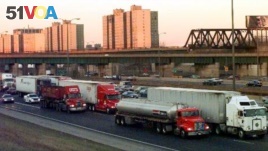 A file photo of traffic near Chicago, Illinois. Economists say trucks carry nearly 70 percent of American freight.
The American Trucking Association represents the interests of the trucking industry. It says freight is a good measure of the economy. This is because businesses have to move unprocessed materials, carry parts to factories, and transport imports and exports.

Bob Costello is the chief economist for the group.

BOB COSTELLO: "We are actually a very good indicator, a leading economic indicator in fact. And so if tonnage starts to fall, we get nervous. If it's going up, we are pretty happy. "

The amount of freight carried by trucks is going up slowly. The American Trucking Association says total freight tonnage increased in June, but remained unchanged in July. That is good news to Bob Costello.

BOB COSTELLO: "It is telling me that the economy is not falling into another recession. It will continue as a sort of a slow growth recovery."

Other information about economic growth comes from air freight, or goods transported by air. Recent reports show demand for air freight fell more than three percent around the world during July.

Perry Flint speaks for the International Air Transport Association. That group represents about two hundred forty airline companies worldwide. It gathers information about air passenger travel and air freight. The group says the amount of international air freight decreased in July from the same period the year before. But other signs show increases.

PERRY FLINT: "It can also, as you start to see air cargo dropping off and you are seeing other signs -- it can also be a leading indicator of a downturn."

The same report shows that passenger traffic increased over three percent from last year. That may be why a top official of Cambria Suites Hotels says travel, not just business travel, is strong. Michael Murphy is with the company.

MICHAEL MURPHY: "We are seeing the highest demand in the history of the hotel industry right now. More people are traveling now than ever before, and that's in all segments of travel."

Conflicting economic signs have made it difficult for economists to predict future growth. For example, government experts first said the American economy expanded at a yearly rate of one point five percent from April to June.

But they amended that prediction as new information became available and showed growth was higher -- more likely a rate of one point seven percent. Changes like that have made it harder for many people to see the road ahead.