Update Required To play the media you will need to either update your browser to a recent version or update your Flash plugin.
By VOA
07 May, 2015


The United States Africa Command is the newest geographically-focused organization in the U.S. military. The command was set up to follow events affecting a whole continent -- Africa. While the continent is huge, the Africa Command is small. It has only one base in Africa, while its headquarters is in Germany.

The command carries out hundreds of operations every year in an effort to make Africa more secure.

Africa Command is known as AFRICOM. It was created less than 10 years ago. Before 2007, U.S. military activities in Africa were directed by European Command, Central Command and Pacific Command. Those military groups were set up to follow developments in Europe, the Middle East and Pacific Ocean countries. 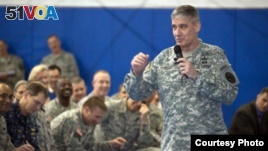 AFRICOM's only base in Africa is in the small nation of Djibouti. The Central Command once used the base because of its closeness to Yemen.

Pat Barnes is a spokesman for the Africa Command. He says AFRICOM decided not to build a new base in Africa.

"When AFRICOM was stood up, one of the key components of it standing up was we would have something called a very small footprint. Given the history and colonialism and things, you maybe wouldn't want to have a large standing presence on the continent."

Mr. Barnes says the command is working to help African nations improve their ability to defend against attack. He says AFRICOM takes part in hundreds of military exercises with African government forces every year. He says the U.S. military teaches things like how to load large aircraft and how to operate under the control of a civilian government.

Millions of people in Africa are on guard against violence and threats of violence by extremists. The threats come from al-Shabab militants in Somalia, Boko Haram in Nigeria and al-Qaida-linked groups in northern Mali.

Mr. Barnes says AFRICOM has just three people in Somalia and a few more in Nigeria to support intelligence-sharing and logistics. Critics say a nation as powerful as the United States should do more to help. But Mr. Barnes says it is not that simple, because AFRICOM will only send its troops to places that ask for help.

"We will only send people where they are requested, so it's not like we can go in and make our own requests."

Dan Hampton teaches security at the Africa Center for Strategic Studies, a military research center at Fort McNair in Washington, DC. He says it is not easy for Nigerian officials to ask for foreign support against what they consider an internal or Nigerian problem. But he thinks that will soon change.

"I think there is going to be an opportunity now with the elections over. I think and I hope you'll see more and better cooperation between Nigeria and the U.S. in tackling this problem in the near future."

Because AFRICOM is such a small command, it recently worked with the much larger U.S. European Command to develop a plan to quickly share forces.

General Philip Breedlove leads the European Command, also known as EUCOM. He calls the plan a model for the future of the U.S. military.

General Breedlove says the size and structure of the force could become an issue in the future. He notes Russia's increased aggression, and a nearly 300% increase in U.S. military activities in Africa over the past eight years.

"I think it is fair to say that we probably ought to look at that force structure and see if it's now adequate to the task that both AFRICOM and EUCOM place on it."

U.S. officials say the partnership between AFRICOM and African nations will continue to grow. Because of these ties, they believe the continent will become more stable, secure and prosperous.

stood up – idiom to organize; to create

standing presence – idiom to have a large, permanent presence in a particular place

logistics – n. the things that must be done to plan and organize a complicated activity or event that involves many people

left and right – idiom everywhere; everything; throughout

Do you agree with the existence and goals of the US Africa Command? We want to hear from you. Write to us in the comments section.