Update Required To play the media you will need to either update your browser to a recent version or update your Flash plugin.
By Susan Shand
05 April, 2019


Aid groups have criticized the United States for its decision to cut assistance to three Central American nations. They warned this week that the decision is likely to backfire.

The charities added that they believe it will increase the numbers of Central Americans moving north toward the U.S. border to escape violence and poverty. 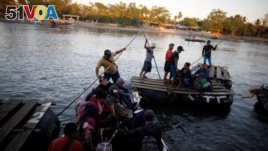 People belonging to a caravan of migrants from Honduras en route to the United States, cross the Suchiate river to Mexico from Tecun Uman, Guatemala, Jan. 18, 2019.

President Donald Trump has said repeatedly that he planned to suspend the aid. He criticized the three for doing little to stop the movement of migrants and asylum seekers, many of whom want to live in the United States.

Charities receive money from the U.S. government to assist with economic and social development in El Salvador, Guatemala and Honduras. The groups say aid cuts will not stop the migrants and may make the situation worse.

"The people who are really going to get hurt by this are the people who are ... small farmers and teenagers trying to avoid the pressures of joining gangs and escape violence," said David Ray. He is with the international aid group CARE.

"Poverty, violence and insecurity - those are exactly the drivers of migration. (It) seems to be self-defeating," he told the Thomson Reuters Foundation.

The United States provides hundreds of millions of dollars every year for aid projects in the Northern Triangle. U.S. aid to Central America dropped to $527.6 million this year from $655 million in 2017. Those numbers come from the Washington Office on Latin America, a research group.

Trump's idea to reduce aid to the Northern Triangle could add to migration north as the situation in their countries worsens, experts said.

"He is concerned about border security," said Robert Zachritz. He is vice president for advocacy and government relations at the charity World Vision. "(This move) is counterproductive," he added.

CARE would have to greatly reduce efforts in the area, including a project that helps poor farmers in Guatemala.

Reducing aid is likely to meet strong opposition in the U.S. Congress.

To make changes, lawmakers must approve Trump's plan to change spending bills already passed. To get congressional approval, the Trump administration must make an official request explaining its plan for removing the aid money from the budget.

"It is Congress that decides on how much foreign assistance the U.S. is going to provide," said Adriana Beltran. She is head of WOLA's Citizen Security Program and a Central America expert.

She added that because Congress controls all the money, there will be a fight between it and the Trump Administration.

Rick Jones works as an advisor for Catholic Relief Services. Last year, the group planned projects in the Northern Triangle with the help of $34.4 million in U.S. government money. It also said a reduction of aid will increase migration.

It "is morally wrong and is counterproductive," Jones said.

One of its endangered projects provides training and jobs to more than 5,000 young people in poor, violent communities in Honduras and El Salvador, he said.

Vicki Gass is a senior policy advisor at Oxfam, a British aid organization that does not receive U.S. money. She said a reduction in aid will create "greater instability" that will lead to more migration. She said that if aid groups don't work to stop the causes of problems such as violence and poverty, they will just get worse and lead to even greater numbers of migrants.

backfire – v. to have the opposite result of what was desired or expected

triangle – n. a shape that is made up of three lines and three an

counterproductive – adj. not helpful; making the thing you want to happen less likely to happen

instability – n. the state of being likely to change