Update Required To play the media you will need to either update your browser to a recent version or update your Flash plugin.
By Susan Shand
12 March 2020


The United States is accusing authoritarian governments around the world of severe human rights "violations and abuses."

Secretary of State Mike Pompeo spoke this week at the release of the 2019 Country Reports on Human Rights Practices. He told reporters, "Experience teaches that government officials who oppress... are also responsible for creating social environments... that encourage corruption, violent conflict, and terrorism." 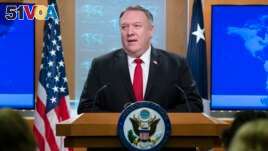 Secretary of State Mike Pompeo speaks on the release of the 2019 Human Rights Report at the Department of State in Washington, Wednesday, March 11, 2020. (AP Photo/Jose Luis Magana)

The U.S. report examines the Iranian government's reaction to widespread protests that began last November after an increase in fuel prices.

There is no evidence that government agencies were seeking independent or impartial investigations into protester deaths, the report said.

The government "blocked almost all international and local internet connections for most of a week," the U.S. report noted.

The report provides an ugly picture of conditions in Iran. It described executions for crimes that failed to meet international legal standards and without fair trials of individuals.

The U.S. report expressed concerns about the openness of the Saudi government about the 2018 killing of journalist Jamal Khashoggi by Saudi officials in Turkey. However, the report did not detail the observations of U.S. embassy officials who attended the suspects' trial in Saudi Arabia.

"The murder of Jamal Khashoggi was an unacceptable crime. We have spoken with the Saudi leadership from the king down about our concerns. The position that we have taken hasn't changed," said assistant Secretary of State Robert Destro.

The U.S. report said the Saudi government, in several cases, did not punish officials accused of human rights abuses, which created an environment of lawlessness.

On Venezuela, the State Department report noted restrictions on political participation and a lack of free speech.

A single party has held political power for more than 10 years, the report said. It added that the party has "an authoritarian executive exercising...control over the judicial, citizens' power, and electoral branches of government."

The reelection of Nicolas Maduro as Venezuela's president was "neither free nor fair," the U.S. report said. It also pointed to issues of unlawful killings and torture by security forces, disappearances, detention, political prisoners, a corrupt judiciary as well as restrictions on freedom of speech.

encourage – v. to add to happiness

prosecution – n. this who represent the state or the courts in a trial

journalist – n. one who seeks out information for newspapers, radio and television

king – n. a male who inherits his rule of a country

participation – n. to join in with others

judicial - adj. regarding the law or the court system