Update Required To play the media you will need to either update your browser to a recent version or update your Flash plugin.
By Anna Matteo
14 June 2021

U.S. government health officials have approved the first new drug for Alzheimer's disease in nearly 20 years. However, independent experts say the treatment has not been shown to help slow the brain disease, reported the Associated Press.

Last week the Food and Drug Administration (FDA) approved the drug, called aducanumab. It was developed by the biotechnology company Biogen in Cambridge, Massachusetts. The drug will be sold under the name of Aduhelm. 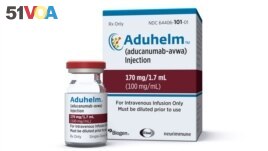 This image provided by Biogen, June 7, 2021 shows a vial and packaging for the drug Aduhelm.

Biogen's stock value increased by 38 percent on the day of the FDA approval.

The approval is based on results showing that the drug seemed "reasonably likely" to help Alzheimer's patients. It is the only treatment that U.S. regulators have said can treat the disease, rather than its resulting conditions, or symptoms.

However, Reuters news agency reported last week that two members of a group of advisors to the FDA have resigned in protest. Dr. David Knopman and Dr. Joel Perlmutter said they strongly disagreed with the FDA's decision to approve Aduhelm for treatment of Alzheimer's.

The decision to approve the drug could affect millions of Americans. It is likely to cause debate among doctors and researchers. The approval may also affect standards used to judge experimental treatments including those that seem to help patients only a little.

How to judge treatments of difficult conditions is the subject of debate. Groups representing Alzheimer's patients and their families say any new treatment should be approved. But many experts warn that approving the drug could be a bad model and would open the door to poor treatments.

Dr. Caleb Alexander was one of the FDA advisers who warned against the drug's approval. The Associated Press reports that he said he was "surprised and disappointed" by the decision.

Alexander is a medical researcher at Johns Hopkins University. He said "the FDA gets the respect that it does because it has regulatory standards that are based on firm evidence." In this case, he said he thought the agency approved the drug without enough evidence.

The World Health Organization estimates that 50 million people around the world have dementia. Alzheimer's disease might be the cause of 60 to 70 percent of those cases. Alzheimer's slowly attacks areas of the brain needed for memory, reasoning, communication and basic, daily tasks.

Researchers do not fully understand what causes Alzheimer's. But there is agreement among some researchers that brain plaque may be one cause.

Aducanumab helps clear a protein called beta-amyloid from the brain. Other experimental drugs have done that. But they did not help patients' ability to think, care for themselves or live independently.

Dr. Patrizia Cavazzoni is the FDA's top drug regulator. She said there are "uncertainties" about the drug. But Cavazzoni added that the drug's ability to reduce harmful plaque in the brain is expected to slow dementia.

"The data supports patients and caregivers having the choice to use this drug," Cavazzoni told reporters. Before joining the FDA, Cavazzoni worked in the drug industry for several years and held high positions in "clinical development, regulatory affairs, and safety risk management" for several large drug companies.

Under the terms of approval, the FDA requires an additional study to see if the drug is working. If the study fails to show effectiveness, the FDA could withdraw the drug from the market. However, the agency rarely does this. Biogen said it aims to complete the study required by the FDA by 2030.

Biogen stopped two studies in 2019 after disappointing results. The studies suggested that aducanumab would not meet its goal of slowing the loss of mental abilities in Alzheimer's patients.

Several months later, the company announced that one of the earlier studies appeared to show that the drug was effective in higher amounts. However, the change raised questions among many experts, including those working for the FDA.

Biogen said about 900 U.S. medical centers are ready to begin using the drug and more are expected to do so in the coming months.

Matthew Perrone reported this story for the Associate Press. Anna Matteo adapted it for VOA Learning English. Mario Ritter, Jr. was the editor.

regulator –n. an official who works for the government and who controls a public activity by enforcing rules

standard –n. a level of quality that is considered acceptable or desirable or that may be required by rules

disappointed –adj. feeling unhappy or displeased because something was not as good as expected

plaque –n. a change in brain tissue that happens in Alzheimer's disease

clinical –adj. based on work done with real patients; relating to medical treatment that is given to patients in hospitals