Update Required To play the media you will need to either update your browser to a recent version or update your Flash plugin.
By Christopher Cruise
31 October, 2014


The United States government's yearly "green card lottery" program is closing in a few days. The program is officially called the Diversity Immigrant Visa Program. It gives 50,000 people from around the world -- and their families -- a chance to come to the United States and live here. The registration period ends on Monday, November 3rd. The State Department says entrants should keep their confirmation number until at least June 30, 2016.

We wrote about the program in early October, when it opened. You can read that report on our website.

Sean Cooper is the director of field operations for the State Department's visa office. He says the program is designed to encourage people from some countries to come to the United States permanently.

"There are many countries around the world from which we're not receiving large numbers -- in excess of 50,000 over the last five years. And from those groups we offer them the opportunity to register for what's sometimes referred to as the ‘visa lottery.' We call it the ‘diversity visa program' -- a chance to be considered for immigration if they meet the program requirements."

This year, like last year, the U.S. government is refusing to consider people from 19 countries for a visa. That is because more than 50,000 people from each of those nations have come to the United States legally in the past five years. Included on the list are Brazil, China, India, Mexico, Nigeria, Pakistan, the Philippines and Vietnam. 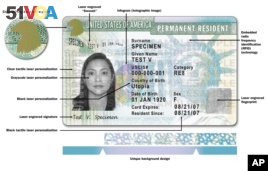 This image released by USCIS shows a sample of the front of the redesigned green card carried by foreign-born residents living permanently in the U.S.

Sean Cooper says the same countries have been on the "not eligible" list for years.

"Well, it changes from time to time. But actually, many of these countries that are included on the list that are not eligible for the diversity visa program this year -- and weren't last year as well -- are from traditionally large sources of immigration to the United States. So for some of them, it's not likely that they're going to fluctuate again and become less than 50,000 over the last five years. For others, it might be. And each year what the law requires is that we review ‘Alright how many people emigrated?' and if they fall into that they would then join the ‘eligible' list."

A person may request a visa under the program even if he or she was born in one of the 19 countries so long as neither parent was born or living legally in the country when the applicant was born. Also, an individual who lives in one of the 19 countries on the "not eligible" list may request a visa if the person they are married to was born in a country whose citizens are permitted to apply.

The visas are made available every year to people from countries with low rates of immigration to the United States. In addition to the 50,000 visas given under the program, 5,000 more are available under the Nicaraguan and Central America Relief Act. The green card lottery closes on Monday. The winners will be chosen by computer.

"We're going to select more applicants from the registration process than that 50,000 ‘cause some will not complete the process. Others may not be able to demonstrate the required qualifications to participate in the diversity visa program -- for example the high school education or equivalent. And so, in order to make sure that we use the full number of visas possible, we are gonna select slightly more than the 50,000 to begin the visa application process."

Sean Cooper says the State Department is warning people against paying consultants or visa agents to enter the program.

"Well it, it is actually a source of great frustration and disappointment for us because we really, we're the people that are working one-on-one with individuals who are selected for this program, helping them through the process. We've worked very hard to make the online process as simple as possible. It really is something that anyone is gonna be able to look at the instruction materials, make sure they believe they qualify, and then provide the required information online themselves. It shouldn't take them too much time, and then they control their own application. We want to make sure that they don't feel like ‘Oh this is a visa process, it might be very complex, I need to make sure I get some assistance here.'"

Mr. Cooper says the application is available in many languages and can be completed in a short period of time. He says people should complete the application themselves so they can control the process. He says if people do that, they will be able to protect themselves from people trying to commit fraud.

Those chosen by the computer to apply for a visa will be able to find their number on a State Department website, starting on May 5th, 2015. U.S. officials will meet with the winning entrants one-by-one, and decide whether they will be given a visa. That process begins in October 2015.

Some people lie in an effort to improve their chances of getting a visa. In 2012, VOA reported that some African countries have very high levels of fraud or cheating. More than half of the entries from Sudan, Ghana and Ethiopia were believed to be fraudulent. So were more than eight out of 10 entries from Nigeria.

Mr. Cooper says if people get a letter or an e-mail stating they have won, and asking for money, it is not from the U.S. government. He says the State Department does not contact winners that way. He says although winners must pay for their visa and related costs, they do not have to pay money to enter the lottery.

"No cost whatsoever. They will never receive any solicitation for any money by mail or e-mail from the U.S. government. All of this is done through that website -- at dvlottery.state.gov. They will have a registration number that they will use to check the status of their case themselves from that website. And we'll never send them anything saying ‘Congratulations you've been accepted,' or ‘Send us some money here.' It's all gotta be through that website and they'll be protected in that way."

VOA correspondent Christopher Cruise reported and wrote this story for Learning English. He also narrated and produced the program. The editor was George Grow.

Words from This Story

confirmation – n. a response which shows that information is received and understood; especially a response that makes a purchase or appointment definite or official

permanent – adj. lasting or continuing for a very long time or forever; not temporary or changing

instruction – n. a statement that describes how to do something

cheating – v. to break a rule or law usually to gain an advantage at something

Now it's your turn to use these Words from This Story. In the comments section below, write a sentence using one of these words and we will provide feedback on your use of vocabulary and grammar.