Update Required To play the media you will need to either update your browser to a recent version or update your Flash plugin.
By John Russell
13 January 2022


Imagine you want to improve your reading skills in English. Perhaps you pick up a book such as "The Night Watchman," an award-winning book by Louise Erdrich. You read the following words:

Thomas Wazhashk removed his thermos from his armpit and set it on the steel desk alongside his scuffed briefcase.

In today's Everyday Grammar, we will explore these words in some detail. You will learn how you can improve your reading skills by making inferences – conclusions or opinions that are based on facts or evidence. 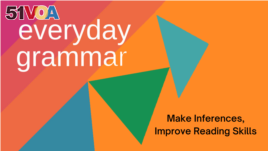 When you read in English, one way to improve your understanding is to ask yourself an important question: Who is doing what?

This question gets to the heart of one of the important structures of English grammar: subject, verb, object.

Thomas Wazhashk removed his thermos from his armpit and set it on the steel desk alongside his scuffed briefcase.

We can start by identifying the subject of the sentence – Thomas Wazhashk. Then we can look to the next word: the verb removed. It is in the past tense. We know this because of the –ed ending.

We already have several important pieces of information. The writer is describing something that Thomas Wazhashk did in the past. He was removing .... what exactly?

Imagine you do not know what a thermos is, or an armpit for that matter. Do not be worried about the terms you do not know. Instead, look for words that you do know.

Note the word his. This word shows possession. It comes before nouns. Therefore, you know that a thermos is a noun, and an armpit is a noun.

So far, the basic structure of the sentence is something like this:

Let's continue with our example sentence. We arrive at the words and set it. The word and is a conjunction, the word set is another past tense verb. Because there is not a different subject stated, we can guess that Thomas Wazhashk is doing another action.

Once again, we have the word his, as in his scuffed briefcase.

You know that a briefcase is likely to be a noun. The word scuffed is probably an adjective. We know this because adjectives often come before nouns and after words such as his.

If we look at the entire sentence – and look for words that mark nouns as well - we arrive at something like this:

Thomas Wazhashk removed his [noun] from his [noun] and set it on the steel desk alongside his [adjective] [noun].

Once you have identified the basic sentence structure, you have a few different ways you could continue reading. You could look up the unfamiliar words in the dictionary. But that process would make your reading very slow.

You could also keep reading and try to understand the broader ideas and actions of the story without paying special attention to unusual words. Instead, you could use what you understand to try to reach a conclusion about what an unfamiliar word means. This is called making an inference.

Here is an example. Imagine you continued reading the description about Thomas. Perhaps you read the following words (which do not actually appear in Erdrich's book):

Thomas opened the thermos and poured hot, steaming coffee into his cup.

When you read this sentence, you can make an inference about what a thermos is. It is an object that holds liquids and keeps them hot.

When you become good at making inferences, your reading skills will improve – as will your enjoyment of reading.

Grammar can help you make inferences. Look for the sentence's subject, verb, objects. And look for function words – words like his, her, their, the, a, an, this, those. These words give you clues about grammatical relationships and can tell you if an unfamiliar word is a noun or adjective.

It will take effort to improve your reading skills, but taking the time to do so will help you read all kinds of wonderful books, news stories, and even social media posts. You will also have better results on difficult English reading tests.

watchman – n. a person whose job is to watch and guard property at night or when the owners are away

function word – n. a word whose purpose is to show a grammatical relationship