Valentine's Day: A History of the Day of Love

Update Required To play the media you will need to either update your browser to a recent version or update your Flash plugin.
By VOA
13 February, 2014

Welcome to American Mosaic in VOA Learning English. I'm June Simms. On the show today we explore the history of Valentine's Day. 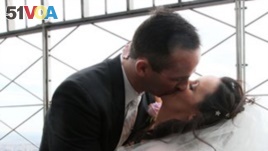 This couple married high up on the Empire State Building in New York on Valentine's Day.
Valentine's Day is for lovers. It is a good day to ask your boyfriend or girlfriend to marry you. It is also a popular day for marriage ceremonies.

But, other couples might celebrate with dinner at a nice restaurant.

The holiday is named for Saint Valentine. He was an early Christian clergyman who was said to have helped young lovers. Valentine was executed for his Christian beliefs on February fourteenth, more than one thousand seven hundred years ago. But the day that has his name is even older than that.

The ancient Romans celebrated a holiday for lovers more than two thousand years ago. As part of the celebration, each girl reportedly wrote her name on a piece of paper and put it in a large container. Each boy reached into the container and pulled out the name of a girl. That girl became his girlfriend for a year.

Lovers still put their names on pieces of paper on Valentine's Day. They send each other cards that express their love. Sometimes they send other gifts, too, like jewelry... or flowers... or candy...or all three!