Update Required To play the media you will need to either update your browser to a recent version or update your Flash plugin.
By VOA
05 March 2021


We present the third of four parts of the short story "William Wilson," by Edgar Allan Poe. The story was originally adapted and recorded by the U.S. Department of State.

You will remember that in the last part of my story I told of my experiences in my first school; I spoke of my early meetings with a boy who looked and behaved as I did – whose name was even the same as mine: William Wilson. I told of the night when I went to Wilson's room, with a plan to hurt him. What I saw that night so frightened me that I left the room and the school forever. As I stood looking down at his sleeping form and face I might have been looking at myself in a looking glass.

It was not like this — surely not like this — that he appeared in the daytime. The same name, the same face, the same body, the same day of coming to school! And then his use of my way of walking, my manner of speaking! Was it, in truth, humanly possible that what I now saw was the result and the result only — of his continued efforts to be like me? Afraid, I left the old school and never entered it again. 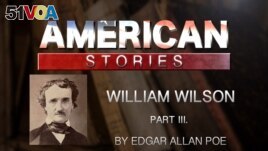 After some months at home, doing nothing, I went to study at the famous school called Eton. I had partly for gotten my days at the other school, or at least my feelings about those days had changed. The truth — the terrible truth — of what had happened there was gone. Now I doubted what I remembered. Now I called the subject into my mind only to smile at the strength of the strange ideas and thoughts I had once had.

My life at Eton did not change this view. The fool's life into which I carelessly threw myself washed away everything that was valuable in my past. I do not wish, however, to tell here the story of my wrongdoing — wrongdoing which went against every law of the school and escaped the watchful eyes of all the teachers. Three years of this had passed and I had grown much larger in body and smaller in soul. Three years of wrongdoing had made me evil.

One night I asked a group of friends who were as evil as I to come to a secret meeting in my room. We met at a late hour. There was strong drink, and there were games of cards and loud talking until the new day began appearing in the east. Warm with the wine and with the games of chance, I was raising my glass to drink in honor of some especially evil idea, when I heard the voice of a servant outside the room. He said that someone had asked to speak with me in another room.

I was delighted. A few steps brought me into the hall of the building. In this room no light was hanging. But I could see the form of a young man about my own height, wearing clothes like those I myself was wearing. His face I could not see. When I had entered he came quickly up to me, and, taking me by the arm, he said softly in my ear: "William Wilson!"

There was something in the manner of the stranger, and in the trembling of his uplifted finger, which made my eyes open wide; but it was not this which had so strongly touched my mind and heart. It was the sound of those two, simple, well-known words, William Wilson, which reached into my soul. Before I could think again and speak, he was gone.

For some weeks I thought about this happening. Who and what was this Wilson? — where did he come from? — and what were his purposes? I learned that for family reasons he had suddenly left the other school on the afternoon of the day I myself had left it. But in a short time I stopped thinking about the subject; I gave all my thought to plans for study at Oxford University.

There I soon went. My father and mother sent me enough money to live like the sons of the richest families in England. Now my nature showed itself with double force. I threw aside all honor. Among those who spent too much money, I spent more; and I added new forms of wrongdoing to the older ones already well-known at the university.

And I fell still lower. Although it may not be easily believed, it is a fact that I forgot my position as a gentleman. I learned and used all the evil ways of those men who live by playing cards. Like such skilled gamblers, I played to make money.

My friends trusted me, however. To them I was the laughing but honorable William Wilson, who freely gave gifts to anyone and everyone, who was young and who had some strange ideas, but who never did anything really bad.

For two years I was successful in this way. Then a young man came to the university, a young man named Glendinning, who, people said, had quickly and easily become very rich. I soon found him of weak mind. This, of course, made it easy for me to get his money by playing cards. I played with him often.

At first, with the gambler's usual skill, I let him take money from me. Then my plans were ready. I met him one night in the room of another friend, Mr. Preston. A group of eight or ten persons were there. By my careful planning I made it seem that it was chance that started us playing cards. In fact, it was Glendinning himself who first spoke of a card game.

We sat and played far into the night, and at last the others stopped playing. Glendinning and I played by ourselves, while the others watched. The game was the one I liked best, a game called "écarté." Glendinning played with a wild nervousness that I could not understand, though it was caused partly, I thought, by all the wine he had been drinking. In a very short time he had lost a great amount of money to me.

Now he wanted to double the amount for which we played. This was as I had planned, but I made it seem that I did not want to agree. At last I said yes. In an hour he had lost four times as much money as before.

For some reason his face had become white. I had thought him so rich that losing money would not trouble him, and I believed this whiteness, this paleness, was the result of drinking too much wine. Now, fearing what my friends might say about me, I was about to stop the game when his broken cry and the wild look in his eyes made me understand that he had lost everything he owned. Weak of mind and made weaker by wine, he should never have been allowed to play that night. But I had not stopped him; I had used his condition to destroy him.

The room was very quiet. I could feel the icy coldness in my friends. What I would have done I cannot say, for at that moment the wide heavy doors of the room were suddenly opened. Every light in the room went out, but I had seen that a man had entered; he was about my own height, and he was wearing a very fine, long coat. The darkness, however, was now complete, and we could only feel that he was standing among us. Then we heard his voice. In a soft, low, never-to-be-forgotten voice, which I felt deep in my bones, he said:

"Gentlemen, I am here only to do my duty. You cannot know the true character of the man who has tonight taken a large amount of money from Mr. Glendinning. Please have him take off his coat, and then, look in it very carefully."

While he was speaking there was not another sound in the room. And as he ended, he was gone!

Now it's your turn to use the words in this story. Have you ever done something even though you knew it was wrong to do? How do you deal with what happens after you do something you know is wrong? Let us know in the comments section or on 51VOA.COM.

manner - n. the way that something is done or happens

wrongdoing - n. behavior that is morally or legally wrong

cards – n. a small piece of stiff paper that is marked with symbols or pictures to show its value, comes in a set, and is used for playing games

gentleman - n. a man who treats other people in a proper and polite way

gambler - n. someone who plays games in which you can win or lose money or possessions; to bet money or other valuable things

paleness - n. the quality of being light in color or lacking color