Stay on Your Toes!

Update Required To play the media you will need to either update your browser to a recent version or update your Flash plugin.
By Anna Matteo
03 March, 2018


Now, it's time for the VOA Learning English program Words and Their Stories.

Each week, we explore the meaning of expressions in American English. We often take terms and examine them from head to toe -- looking at each and every detail -- making sure not to overlook anything.

Speaking of toes, let's talk about them for a minute. 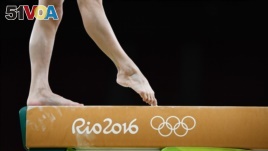 FILE - A member of China's women's gymnastics team is ready to stay on her toes in the 2016 Rio Olympics. (REUTERS/Dylan Martinez)

Like the rest of our feet, they spend all day stuck inside socks and shoes. This can't be good for them. So, let's take them out of our shoes, give them a chance to stretch, and talk about how we use them in every-day speech.

While listening to this program, you need to stay on your toes. We will give one example after another. So, you'll need to listen closely or you might miss one.

Staying or keeping on your toes not only means to pay close attention. It also means to be ready to act. For example, when trying something dangerous, you need to keep on your toes. You want to be ready for anything that may happen.

This expression comes from the fact that when you actually lift your heels and shift your weight to the balls of your feet and your toes, you are ready to jump into action!

Now, the phrase keeping on your toes is different from tiptoeing around. Your feet are in a similar position. All your weight is on the balls of your feet. But the two expressions have different purposes and meanings. In fact, they are opposites.

As we said, when you are on your toes, you are prepared to take action. But when standing on your tiptoes, you are not very balanced. You are either trying to make yourself taller to reach something or you are trying to walk very quietly.

So, in American English, to tiptoe around something means to avoid an issue or talking about something in an indirect way.

Here's an example of this expression.

"At the community meeting, city officials tiptoed around the issue of violence in schools for too long. Parents came to the meeting to hear solutions and not evasive language."

Now, toes are important when we walk. They help us keep our balance. But they are good at something else.

Imagine a person running up to a lake or the ocean to take a swim. Some brave people might just jump right in. They don't care how cold the water is. Others may want to test the water temperature first. So, they put a toe in the water before jumping in.

There are other situations where you should put your toes in the water before jumping right in.

Before moving to a new city or perhaps starting a new job, you need to do some serious thinking. When some people start a job, they may want to jump right in. But others move more slowly so as to avoid any unnecessary risk. Unsure about how their abilities measure up in the workplace, they tiptoe around co-workers. Or they are careful to avoid politically divisive or touchy subjects.

Working in this way, new employees won't make anyone angry. They won't step on anyone's toes.

Now, when you actually step on someone's toes, most people simply apologize and that will be that. But stepping on someone's toes in the idiomatic sense is more serious. It means you have done something on purpose to offend someone else.

But stepping on a co-worker's toes is not the worst thing you can do. If you go toe-to-toe with someone – that can be much worse!

Toe-to-toe has two meanings: to be in direct competition with someone or to fight with someone. So, going toe-to-toe with a co-worker in a friendly, but competitive way is fine. In fact, employees are often expected to compete with one another in the workplace. If you are sure in your abilities, you are not afraid to go toe-to-toe with anyone.

However, going toe-to-toe with a co-worker by having a fight or argument with them is not a good idea.

The company might fire one or both workers! At the very least going-toe-to-toe can create a difficult work environment. So, sometimes it's a good idea to toe the line when you start working a new job. Just follow the rules and do your best not to step on anyone's toes.

Some native English speakers think this expression starts with the verb "tow," meaning to pull. It's not hard to understand why. We often tow things with a line of rope. But in this expression, the word "toe" is spelled t-o-e -- not t-o-w.

Word historians have attempted to explain the origin of this expression. Some claim it comes from the sport of boxing. In the boxing ring, fighters are so close to each other that their toes seem to touch.

However, the one story that connects most closely with following the rules is from boating.

Some people say that in the 19th century, sailors faced punishment if they did not obey shipping rules. To prepare, crew members would stand in a line with their toes on a crack, or line, between the wooden boards that make up the deck of the ship.

And that's Words and Their Stories for this week. Thanks for listening.

We hope you found these expressions useful. We avoided using them in stories that might make your toes curl. After all, if you feel uneasy and uncomfortable, you probably won't come back for more.

Tiptoe by the window
By the window, that is where I'll be
Come tiptoe through the tulips with me

Oh, tiptoe by the garden
By the garden of the willow tree
Come tiptoe through the tulips with me ...

Anna Matteo wrote this for VOA Learning English. George Grow was the editor. At the end of the audio story, Tiny Tim sings "Tiptoe Through the Tulips."

evasive – adj. not honest or direct

idiomatic – adj. an expression that cannot be understood from the meanings of its separate words but that has a separate meaning of its own

fire – v. to dismiss from employment

deck – n. a flat surface that forms the main outside floor of a boat or ship

curl – v. to twist or form (something) into a round or curved shape : to become curved or rounded