Update Required To play the media you will need to either update your browser to a recent version or update your Flash plugin.
By Anna Matteo
17 March, 2018


Now, Words and Their Stories from VOA Learning English. Every week, we explore common expressions in American English.

If conditions get bad enough, almost any kind of weather can become a storm.

"Don't know why there's no sun up in the sky, stormy weather

since my man and I ain't together, keeps raining all the time."

If you weather the storm, or ride out the storm, you survive and move on without harm or injury. For example, let's talk about Tornado Alley, the name for part of the central United States. 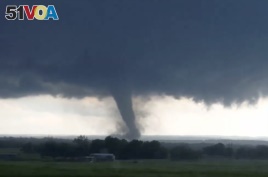 This image taken from a car window shows a tornado in Oklahoma, May 9, 2016.

During springtime, this area often has a large number of powerful tornadoes. People who live there are taught to hunker down in the safest place they can find and wait for the storm to pass. People who live in Tornado Alley are used to weathering many storms!

You can also weather a storm, they doesn't involve actual weather.

"To weather the storm" can also mean to make it through a difficult experience or trying times. So, if the stock market crashes, you might have to weather a financial storm. If you are a politician who gets discredited in public, you may have to lie low and weather the political storm.

Often before a big storm, conditions are calm.

The calm before the storm can happen anytime. It is the time before something bad happens. For example, at the beginning of a family reunion, the adults were all talking happily. But the older children knew it was just the calm before the storm. They've seen it happen before. The adults talk happily for about an hour. Then they start arguing about events from the past -- things that should really stay buried!

But after the storm begins and you find yourself in the middle of it, you are in the eye of the storm.

In the world of weather, the eye of the storm is the calmest part, in the center of a hurricane, for example.

Now, a storm can cause great destruction, but it can also cause excitement. It's something people talk about.

If you want to give people something to talk about, you might want to use the following "storm" phrasal verb. Combining a verb with "up" and then the words "a storm" gives you a very useful phrasal verb. It means doing something to a great extent or degree.

I think you get the idea.

Let's look again at the verb "to storm." It can also mean to attack. If soldiers storm a military base, they are attacking it. Used another way, you could say one storms into a place. We only do this when we are angry and/or full of purpose.

For example, if you find out that someone at the place where you work is making twice as much as you do while doing less work -- you might storm into your supervisor's office and demand a raise. But I would suggest that you call, make an appointment and calmly walk into the meeting.

There is another very useful expression involving the word "storm." But it has two very different meanings.

Taking something by storm can suggest a sudden, perhaps violent attack. For example, the police took the bank by storm and arrested the bank robbers.

But this term can be used in another way. "To take something by storm" can mean to have great and sudden success in a certain field. And that field can be just about anything.

Let's say you are a great cook and open a new restaurant. Everyone loves it and it quickly becomes a big success. You can then say you took the restaurant world by storm.

Or maybe you are a gifted violinist and perform in over 100 cities. Critics love you and they say you are taking the classical music world by storm.

So, taking something by storm is a good thing. But a perfect storm is not.

In the world of weather, a perfect storm is a violent storm that results from a rare combination of severe weather events. We can use this expression in other situations, but the meaning is the same. It's when a particularly bad or critical situation arises from several bad and usually unpredictable events.

Let's hear this one in an example.

You are going on a trip and you are very excited! You have no idea that a perfect storm is building to ruin your vacation. First, the city where you're going has an unexpected electrical outage. Then when you arrive you find that the airline has lost your luggage. And finally you discover that a person you really don't like is staying in the same hotel and wants to hang out the whole time!

There are other kinds of storms.

Firestorm is also another "storm" word that can used when talking about the weather and real life. An actual firestorm is a strong, damaging fire that often has tornado-like columns of fire.

In conversation, a "firestorm" is a violent outburst or disagreement that causes damage. For example, the movie star created a firestorm when she made comments about the political situation in her home country.

However, a brainstorm does not exist in the world of weather. To brainstorm means to try to solve a problem by talking with other people.

And that's Words and Their Stories for this week. I'm Anna Matteo.

And don't worry. If we have trouble thinking of an idea for the next program, we can always brainstorm with you!

Into the house we're born, into this world we're thrown."

flip – v. to change from one state, position, subject, etc., to another

hunker down – phrasal verb to lower the body to the ground by bending the legs : to stay in a place for a period of time to remain safe

degree – n. a step or stage in a process, course, or order of classification

column – n. something that is tall and thin in shape