Afghan Forces Fight to Keep IS from Expanding Safe Haven

Update Required To play the media you will need to either update your browser to a recent version or update your Flash plugin.
Ayesha Tanzeem
October 31,2015


NANGARHAR PROVINCE, AFGHANISTAN— The front lines against the so-called Islamic State in Afghanistan are constantly under threat. Afghan security forces are fighting to keep the militant group at bay.

Signs of intense fighting can still be seen on the wall of a checkpoint in Achin district that is almost an unofficial boundary between the Afghan government and IS territory. Last month, IS fighters attacked this post and overran it for a couple of days before the government took it back. 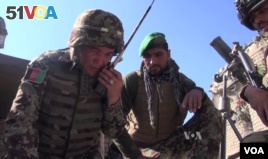 The valleys beyond have become a safe haven for hundreds of IS fighters. They have brutally killed those who did not join them, and thousands of people fled the area. Local officials say IS is trying to move beyond this district.

“They wanted to take over not just Achin but all of Nangarhar,” said Haji Ghalib Mujahid, the Achin district chief governor. “Their plan was to attack first Achin, then Ghani Khel, and then Jalalabad. And they were well-equipped."

Security forces stopped that attack and insist they have things under control.

But fear among people in the area is growing. Residents say IS is increasing its presence in the surrounding districts. The government has promised to launch a full-scale operation against the group, but it appears to be tied down elsewhere in the country.

And, at least for now, there seem to be no efforts to clear out the IS safe havens in the mountains.