Update Required To play the media you will need to either update your browser to a recent version or update your Flash plugin.
By VOA
Jul 7, 2018


In Afghanistan, President Ashraf Ghani announced the end of the Afghan government's unilateral cease-fire. Despite President Ghani's historic offer to extend the ceasefire another ten days, the Taliban did not extend its own participation past the Eid festival.

Nonetheless, Afghan President Ghani offered to sit down with Taliban leader Mawlawi Haibatullah Akhundzada, “anywhere he wants” to engage in negotiations that could bring about the peace the Afghan people briefly but so joyously glimpsed during the Eid holiday. 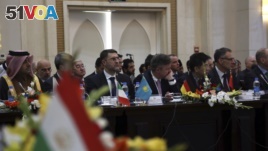 During the ceasefire, the Coalition did not conduct any air strikes against the Taliban, said Brigadier General Lance Bunch, Assistant Deputy Commanding General for Air, U.S.-Forces-Afghanistan. The Afghan Air Force carried out dozens of self-defensive strikes, but only when the Taliban took offensive action against Afghan government forces.

General Bunch, part of whose mission is to train, advise, and assist the Afghan Air Force as it builds its capacity, praised that force's response to the Taliban's offensive actions:“It's been an honor to watch them own this fight and want to own it,” he said.“Every day, they're only getting better and more capable, on the battlefield and in the air. They are fighting for the future of their nation and for the rest of the world, as well.”

General Bunch pointed out that the purpose of the Coalition's air campaign during the winter and into the spring was “to pressure the Taliban into reconciliation, and help them realize that peace talks are their best option.”

He said the Coalition's military pressure “has been amplified by the diplomatic and social pressure that is manifesting itself across the country in the form of the Afghan people calling for peace.”

Leading that diplomatic pressure campaign is Principal Deputy Assistant Secretary Alice Wells who recently visited Kabul to underscore U.S. support for an Afghan-led peace process and reiterate the United States is ready to support, facilitate, and participate in peace discussions.

“The war is not going well for the Taliban,” General Bunch declared, adding that before President Donald Trump's South Asia Strategy gave the U.S. military expanded authorities, “the Taliban thought they could wait for us to leave because we lacked the will. We are showing them otherwise; the Afghan people are showing them otherwise, because,” he said, “the overwhelming desire of the Afghan people...is for peace and stability in this great nation.”