Update Required To play the media you will need to either update your browser to a recent version or update your Flash plugin.
Joe DeCapua
March 12,2015


When the Ebola outbreak finally ends in Guinea, Liberia and Sierra Leone, those countries could continue to face serious health problems. Researchers say Ebola has disrupted health care systems, causing a “significant decrease” in vaccinations for measles and other childhood diseases.

Dr. Justin Lessler said health care systems took a beating during the Ebola crisis with about 75 percent of services being disrupted.

“The health care systems there were somewhat weak to begin with. And during the Ebola crisis many health care centers closed and there’s evidence that less people were coming to the facilities that were open. I think that while we’re getting a better picture now of what the situation is, there’s still a lot of uncertainty remaining because it’s a very dynamic situation.”

Lessler is an assistant professor in the Department of Epidemiology at the Johns Hopkins Bloomberg School of Public Health. In the journal Science, he and his colleagues warned of the secondary effects of Ebola in West Africa. 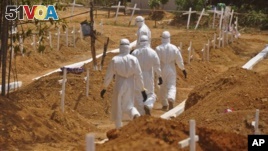 Health workers walk inside a new graveyard as they move bury people suspected of dying from the Ebola virus on the outskirts of Monrovia, Liberia, Wednesday, March 11, 2015. Liberians held a church service Wednesday for families who lost members to Ebola to mark the country's 99th celebration National Decoration Day, a holiday normally set aside for people to clean up and re-decorate the graves of their lost relatives. (AP Photo/Abbas Dulleh)

“There are a lot of other diseases that we depend on the health care system to help either prevent or treat. So, our particular focus was on measles because it’s one of the diseases that’s most sensitive to reductions in rates of vaccination for children. Those reductions in vaccination both increase the risk of a measles outbreak and increase the impact of such an outbreak were it to occur,” he said.

The World Health Organization said, in 2013, measles was blamed for more than145, 000 deaths worldwide – mostly young children. In 1980, before widespread vaccinations, there were more than two and a half million deaths from measles every year.

After a slow start, the international community rushed in money and resources to stop the spread of Ebola. It might appear that such input would rebuild the health care systems.

Lessler said, “I don’t think that would be a safe assumption because the resources that were poured into the regions were very focused on Ebola themselves. And the countries themselves are still on the front line of all the responses. And there are people who are having to react to Ebola previously had other roles in the health care system of the country. And then there’s just the issue of focus. There’s limited ability to focus on multiple health threats at once and if everybody’s thinking about Ebola and how to respond to Ebola other diseases might get a short shrift.”

Asked how long it would take for health care systems in Guinea, Liberia and Sierra Leone to recover, Lessler said,”That’s a little bit hard to say and I’m not necessarily comfortable in making a projection overall. Fixing vaccinations is something that could be done relatively quickly depending on how the logistical constraint [affects] it. These countries in the past have conducted nationwide vaccination campaigns successfully. And such a campaign could be done on the time scale of a year or maybe even less.”

He said at least two lessons were learned from the Ebola epidemic.

“I think one is that we all benefit from having strong health care systems everywhere in the world. So that when crises occur they can be well contained and that there’s excess capacity so there aren’t as many secondary effects from the crises occurring. And the second is that when we go in to respond to a crisis that we try to keep our eyes on the full picture of human health – and not only the specific headline grabbing threat of the moment.”

The Johns Hopkins assistant professor said the outbreak changed the world’s view of Ebola. It did not just occur in rural, isolated areas and did not simply burn itself out because it’s so deadly.

"This outbreak proved that if there was right mix of disease spread and mistrust between the populace and the public health response that we could have outbreaks quite a bit bigger than we had before," he said

Lessler said the primary recommendation is to launch a campaign to increase childhood vaccination rates. He said the potential benefits are considerable by mitigating the side effects of the Ebola crisis