Update Required To play the media you will need to either update your browser to a recent version or update your Flash plugin.
By VOA
Jul 8, 2018


Once again, Iran is ranked with some of the worst places in the world in terms of the fight against human trafficking – the buying and selling of men, women and children in the labor and commercial sex markets. According to the State Department's most recent Trafficking in Persons report, Iran is a “Tier 3” country -- like North Korea, Belarus, Syria and Venezuela, among others.

The State Department described Iran as “a source, transit, and destination country for men, women and children subject to sex trafficking and forced labor.”

Among the depredations committed in Iran, Iranian girls between 13 and 17 are targeted by traffickers for sale abroad. Afghan migrants and refugees, including children, are “highly vulnerable” to being trafficked for labor and sex. Afghan men are coerced by the IRGC into fighting in Syria. Organized criminal groups kidnap or purchase and force Iranian and migrant children to work as beggars. Temporary marriages for the purpose of commercial sexual exploitation, lasting from one hour to one week, are reportedly on the rise. 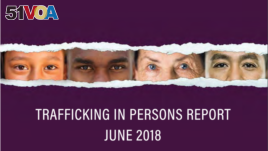 This year's Trafficking in Persons Report by the US State Department.

Yet, the State Department notes, the Iranian government took no significant steps to address its “extensive trafficking problem.”

It did not initiate anti-trafficking investigations; it made no efforts to prevent Iranian officials from forcing Afghan refugees into combat; it failed to provide appropriate protection services to trafficking victims. In fact, as Secretary of State Mike Pompeo observed at the report's release, trafficked individuals in Iran are treated like criminals:

Among other measures, the U.S. State Department is urging Iran to ensure that sex and labor trafficking victims are not punished for unlawful acts committed as a result of being trafficked; offer protection services to trafficking victims; prosecute sex trafficking and labor cases; and cease coercing individuals into fighting its proxy wars.

As Secretary of State Pompeo says, “Modern slavery has no place in the world.” Through diplomatic engagement, increased action, and attention, the United States, he promised, will continue to combat this global threat.