Update Required To play the media you will need to either update your browser to a recent version or update your Flash plugin.
By Heather Murdock
Nov 22, 2016
SINJAR, IRAQ —

Once a bustling city, Sinjar lies in ruins. There are no city services and hardly any people.

Few families have returned since peshmerga soldiers captured this city a year ago. Several different military groups allied against Islamic State are stationed in the area.

Locals say the initial IS takeover in 2014 was terrifying and swift. 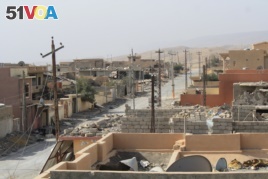 Once home to roughly 80,000 people and a traditional homeland for the Yazidi people, Sinjar, Iraq, lies in ruins and thousands are buried in mass graves outside the city. Nov. 14, 2016. (H.Murdock/VOA)

"When they first arrived, they were well-armed because they had already taken Mosul and stolen weapons," said Baran Qasim, a local shop owner. "So when they attacked, our forces had Kalashnikovs [rifles] and IS had heavy artillery."

In the days and months that followed, tens of thousands of people fled the city. Some starved to death, others committed suicide to avoid the horrors IS was inflicting on the Yazidi people.

Among the most terrifying acts was the kidnapping of thousands of women and girls.

"I would rather they have killed me than witnessed what was done to my people," said Naam Farhab, a mother of seven, weeping. "It was more than 3,000 girls and women, even Yazidi children. It is one thing to kill men, but to steal and rape women and girls?"

Peshmerga forces captured Sinjar a year ago, and still hold a line a few kilometers from IS positions. Heavy fighting only slowed a month ago, soldiers say, and the extremists still occupy about 20 percent of the region. And for the soldiers, the stakes could not be higher.

"IS took the people in groups, killed them and put the bodies in dump trucks," said Talib Naif Jaso, a unit commander for the peshmerga forces. "Even old women. The bodies were thrown in holes along with some people who were buried alive."

Locals said they didn't think this ruined city could be rebuilt, and they are sure, in this region of broken hearts, that their lives will be just as difficult to repair.