A Dual Attack on the So-Called Caliphate

Update Required To play the media you will need to either update your browser to a recent version or update your Flash plugin.
By VOA
Nov 18, 2016


The assault on ISIL's phony caliphate in Syria and Iraq intensified this month when the Syrian Democratic Forces, or SDF, started their campaign to isolate and liberate the Syrian city of Raqqa, considered by ISIL to be its capital. The SDF is made up of Kurdish and Arab fighters; the U.S.-led Coalition is helping SDF operations by providing air and advise-and-assist support.

U.S. Army Lieutenant General Stephen Townsend, commander of the Combined Joint Task Force Inherent Resolve, said in a statement that the “isolation of Raqqa, when complete, will liberate strategically valuable terrain surrounding Raqqa and enable the liberation of the city. Ultimately, the liberation of Raqqa will free Syrians to return to a life free from Islamic State of Iraq and Levant atrocities and deny ISIL a safe haven to plot external attacks against the West.”

ISIL's atrocities were fully on display recently during the ongoing battle for Mosul, Iraq's second largest city which has been held by the terrorist group since 2014. The battle to liberate Mosul began in October, led by Iraqi Security Forces and Peshmerga fighters, with air support from the anti–ISIL U.S.-led coalition. As ISIL fighters retreated deeper into Mosul, dozens of people deemed to be traitors and collaborators by ISIL were found hanged from traffic poles; south of the city a mass grave was discovered containing more than 100 bodies, described by United Nations spokesperson Ravina Shamdasani as one of several ISIL “killing fields.”

Other ISIL atrocities that have come to light as Iraqi and Peshmerga forces have slowly advanced on and into Mosul include torture, sexual violations of women and girls, use of children as soldiers -- reportedly in some cases -- after ISIL fighters had fled. 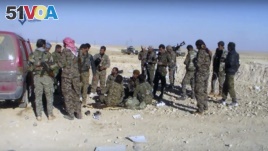 Defense Department Spokesperson Peter Cook noted that the fight against ISIL is a difficult one, and has particularly shown itself to be so in Mosul's urban environment. However, “Iraqi security forces [and] the Kurdish Peshmerga forces are demonstrating significant skill and resilience in this fight,” he said.

U.S. Secretary of Defense Ash Carter called the fight to take back Raqqa and Mosul “necessary to end the fiction of ISIL's caliphate and disrupt the group's ability to carry out terror attacks against the United States, our allies and our partners. The international coalition,” he promised, “will continue to do what we can to enable local forces in both Iraq and Syria to deliver ISIL the lasting defeat it deserves.”