Update Required To play the media you will need to either update your browser to a recent version or update your Flash plugin.
By Ray McDonald
Nov 11, 2016


The votes are in and we're looking at the five most popular songs in the Billboard Hot 100 Pop Singles chart, for the week ending November 12, 2016.

No contested results here: the Billboard editors have ranked these songs based on cumulative sales, airplay, and streaming data.

The people must have liked last week's lineup, because they kept it intact: we get no new songs.

Let's open in fifth place, where D.R.A.M. and Lil Yachty hold with “Broccoli.” Lil Yachty is expanding his income streams. After being featured in a TV ad for soft drink Sprite, Lil Yachty is now partnering with clothing manufacturer Nautica. The 19-year-old rapper is modeling a new line of holiday season clothing designed in cooperation with retailer Urban Outfitters. The digital ad campaign goes online November 14. 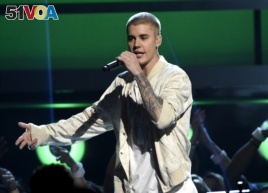 DJ Snake and Justin Bieber spend another week in fourth place with “Let Me Love You.” The MTV Europe Music Awards took place November 6 in Rotterdam, Holland...and just as he did last year, Justin emerged a big winner. In 2015, he took five trophies; this time, he won three. “Sorry” took Best Song; Justin was named Best Canadian Act, while his fan army, the “Belibers,” took to social media to snatch the Biggest Fans honor.

Twenty One Pilots treads water in third place with “Heathens.” The Ohio duo is criss-crossing the globe on its “Blurryface” tour, and the live show – which is heavy on audience participation – helped earn Twenty One Pilots an MTV Europe Music Award for Best Live Act. The pair also took Best Alternative Act.

The Weeknd and Daft Punk have run into a roadblock, as “Starboy” spends a third straight week in the runner-up slot. Whether or not they can surmount this obstacle, at least they have a shiny new trophy: “Starboy” took home an MTV Europe Music Award for Best Video. The Weeknd himself was present to claim it, and also performed “Starboy” from inside an enclosed star-filled dome. The Chainsmokers and Halsey now own the longest-running champion hit of 2016, as “Closer” logs an 11th week at the top. It passes Drake's “One Dance” to grab the honor. It's only the 21st song in the 58-year history of the Hot 100 to last this long at the top.

The record is 16 weeks...can they match it? Join us next week for an update.