Update Required To play the media you will need to either update your browser to a recent version or update your Flash plugin.
By VOA
Feb 1, 2017


Joaquin Archivaldo Guzman Loera, known by various aliases including “El Chapo,” 59, arrived in the United States on January 19th, following his extradition from Mexico. He was arraigned the following day on a 17-count superseding indictment, before U.S. Magistrate Judge James Orenstein in federal court in Brooklyn. 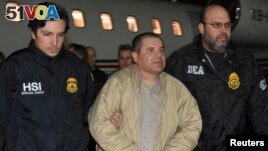 The indictment alleges that between January 1989 and December 2014, Guzman Loera led a continuing criminal enterprise responsible for importing into the United States and distributing massive amounts of illegal narcotics and conspiring to murder persons who posed a threat to Guzman Loera's narcotics enterprise.

Guzman Loera is also charged with using firearms in relation to his drug trafficking and money laundering relating to the bulk smuggling from the United States to Mexico of more than $14 billion in cash proceeds from narcotics sales throughout the United States. As part of this investigation, nearly 200,000 kilograms of cocaine linked to the Sinaloa Cartel have been seized. The indictment seeks forfeiture of more than $14 billion in drug proceeds and illicit profits.

“This extradition is a tremendous victory for the citizens of Mexico and of the United States,” said DEA Acting Administrator Rosenberg.“Two principles stand out: No one is above the law and we simply do not quit in the pursuit of justice.”