Update Required To play the media you will need to either update your browser to a recent version or update your Flash plugin.
By Ray McDonald
Jan 20, 2017


We're binging on the five most popular songs in the Billboard Hot 100 Pop Singles chart, for the week ending January 21, 2017.

It's not a bad week, all things considered, especially if you liked last week's songs.

Let's open in fifth place, where Bruno Mars holds steady with “24 K Magic.” Bruno has a Filipina mother, and rumors were flying that he'd be in the Philippines to sing at the Miss Universe pageant on January 30. Unfortunately, Tourism Undersecretary Kat DeCastro says that's not the case. Mars is busy preparing for his world tour, beginning on March 28 in Antwerp, Belgium. 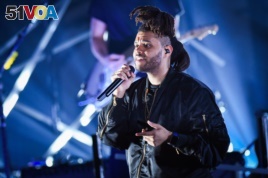 The Weeknd and Daft Punk slip to fourth place with “Starboy,” two weeks after finally hitting number one.

The Weeknd has been seen out and about with Selena Gomez, but the web site Hollywood Life reports that he wants to keep the romance low-key. He's coming off a year-long relationship with model Bella Hadid. As for Selena, you may remember her turbulent time with Justin Bieber, which was anything but low-key.

Rebounding a slot to number three are The Chainsmokers and Halsey with “Closer.”

It's a good week all around for Alex Pall and Drew Taggart: they just released a new single, “Paris,” while the official lyric video for “Closer” has surpassed one billion views on YouTube.

First they were in, now they're out, maybe they'll be back in again: Rae Sremmurd lose their Hot 100 crown, as “Black Beatles” falls to second place.

This week, Rae Sremmurd is on tour in the United Kingdom. “Black Beatles” hit second place in the U.K., while topping the R & B chart. It also topped the chart in New Zealand and the Australian urban list – so far, neither country is on the duo's touring itinerary.

Up at number one are your new champs Migos and Lil Uzi Vert with “Bad And Boujee.”

The single appeared in October, and late last year it became an online phenomenon. The lyrics turned into an Internet meme, and last week actor Donald Glover referenced the song, during his acceptance speech at the Golden Globe Awards.

What happens next week? Join us in seven days and we'll find out.