Update Required To play the media you will need to either update your browser to a recent version or update your Flash plugin.
By VOA
Jan 12, 2017


The United States condemns in the strongest possible terms the recent horrific vehicular attack by a terrorist in Jerusalem.&#8206; Four soldiers were killed, including one U.S. citizen, and 17 wounded, when a flatbed truck driven by an Arab terrorist rammed into a group of soldiers adjacent to the Armon Hanatziv promenade in southeastern Jerusalem on January 8.

Three female soldiers and one male soldier were declared dead at the scene. According to the Israeli Defense Forces, an additional two cadets were seriously wounded, and 15 other officers and cadets sustained less severe wounds. 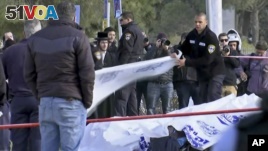 Israeli Prime Minister Benjamin Netanyahu, who visited the scene with Defense Minister Avigdor Liberman shortly after the attack, said the identity of the terrorist was known. Later, he was identified as Fadi al-Qanbar, from a nearby Jerusalem neighborhood.

“We are fighting this plague, and will defeat it. . . .We will overcome this terrorism, just as we overcame other attacks,” said Prime Minister Netanyahu.

Speaking to reporters following the attack, Jerusalem Mayor Nir Barkat said, "To our dismay, there is no limit to the cruelty of the terrorists who are willing to use any means possible to murder Jews and to damage the routine of life in Israel's capital."