Update Required To play the media you will need to either update your browser to a recent version or update your Flash plugin.
Lenny Ruvaga
December 10,2015


KAWANGWARE, NAIROBI— Several low-income settlements outside Nairobi are using a new community-based currency called "pesas," which are equal in value to the Kenyan shilling and can be spent in the community just like cash.

In Kawangware, an informal settlement on the outskirts of Kenya’s capital, students make their way to Sifa Primary School and pay their tuition with Gatina pesas. The school is one of several institutions that accepts the community currency.

Teacher Josephine Ouma said the currency has made life easier.

"This currency works in a way that it circulates, so as a teacher I get it from the parents and I still take the same currency back to the parents to buy their goods," she explained. "So it is a circulation process that I do not think there can be any scarcity."

Teacher Josephine Ouma says the currency has made life easier.

The NGO Grassroots Economics rolled out the currency last year. Pesas are only valid in the Gatina Village part of the settlement.

The NGO gave pesa’s to about 500 locals.

Each member must be vouched for by four business owners. The member then receives a maximum of 400 pesas, of which 200 are saved and pooled for community improvement projects. The rest they can spend like cash.

But those 500 members are a fraction of the approximately 10,000 people living in Gatina Village.

“There are some challenges with the currency," Francis Njuguna said. "Since there are a lot of people here who have not accepted its use, but I believe that once we educate them on it, they will accept it, since many more are joining as we continue to enlighten them.” 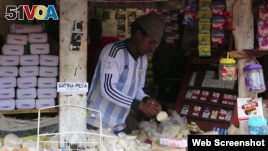 Community currency is a legal tender that works as a promissory note and works hand in hand with the national currency.

The NGO said it started with a small number of members to make monitoring easier, but experts note that community currencies do have limitations.

"It prevents you from getting goods and services from outside the economy, the local economy, and that means that the exchange networks are often quite small," stated Radha Upadhyaya, with University of Nairobi, Institute for Development Studies.

"A second weakness is the organization. At the moment, a lot of community currencies are organized in a voluntary form and after a certain amount of time the impetus runs out," Upadhyaya said.

Grassroots Economics plans to expand the initiative to communities in Rwanda, Uganda and Tanzania in 2016. Participants say the currency provides a cushion against hard times.