Update Required To play the media you will need to either update your browser to a recent version or update your Flash plugin.
Michael Bowman
December 13,2015


WASHINGTON— Americans are digesting a global climate accord that is dividing Washington along predictable partisan political lines.

“This agreement will mean less of the carbon pollution that threatens our planet, and more of the jobs and economic growth driven by low-carbon investment,” said a jubilant President Barack Obama shortly after the deal was announced Saturday.

“What matters is that today we can be more confident this planet is going to be in better shape for the next generation. And that is what I care about,” Obama added. 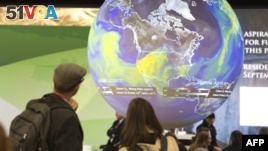 People look at an Earth globe display at the COP21, the United Nations conference on climate change in Le Bourget, Dec. 10, 2015.

Congressional Democrats flooded Twitter to hail the accord. Not so Republicans, who announced their opposition even before the deal was struck.

In a statement, Senate Majority Leader Mitch McConnell blasted the accord as “unattainable” and “based on a domestic energy plan that is likely illegal, that half the states have sued to halt, and that Congress has already voted to reject.”

The accord is not a formal treaty and therefore requires no Senate ratification to go into effect. Whoever succeeds Obama in 2017 could halt or continue America’s adherence to its provisions.

Republican presidential contenders say the planet can be protected without what they see as Obama’s job-killing climate agenda.

‘Wrong side of history’

The administration is standing firm.

“A lot of members of Congress are on the wrong side of history,” said Secretary of State John Kerry on ABC’s This Week program. “And I don’t believe you can be elected president of the United States if you do not understand climate change and you aren’t committed to this kind of a plan.”

Among Democratic presidential contenders, Hillary Clinton called the climate deal “a historic step forward in meeting one of the greatest challenges of the 21st century.” In a tweet, Senator Bernie Sanders said the accord “goes nowhere near far enough.”

“There is nothing of greater importance than that we leave this planet to our children and grandchildren in a way that is healthy and habitable,” Sanders added at a campaign event Saturday.

The accord is sure to spark fierce debate when Congress reconvenes this week.