Update Required To play the media you will need to either update your browser to a recent version or update your Flash plugin.
William Eagle
February 03,2015


Sambo Dasuki, the National Security Advisor for Nigerian President Goodluck Jonathan, says he favors delaying presidential elections by a few weeks so all registered voters can receive ID cards needed for the polls.

Sambo Dasuki says the Independent National Election Commission, or INEC, still has not distributed 30 million cards. He says he has told the commission he’s concerned they may not be distributed in time for the election on February 14th.

"We raised [the issue] with INEC and we said, “Look, there is a problem. You’ve had [more than] a year and all you’ve been able to do is to distribute about 50% of the cards. If you can distribute those cards today, we would all be happy. But if you can’t, please [re]consider. Look at the other option."

Some say the law allows the polls to be held within a 90-day window, but the main opposition All Progressives Congress (APC) is against delaying the vote. An INEC spokesman said the commission is committed to holding the election on February 14th. President Goodluck Jonathan has made no remarks on his commitment to the specific date, but did say the inauguration of the winner on May 29th was in his words “sacrosanct.”

Dasuki also said the government is taking measures to ensure a peaceful atmosphere for the polls. 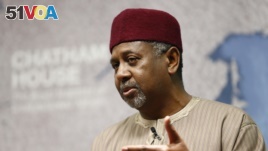 He said a new interagency committee has been created to coordinate security on state and local government levels. Police and other services are intervening to prevent potential crises and help ensure that voters in the northeast, displaced by Islamic radical group Boko Haram, can vote.

Critics are skeptical of the performance of the agencies recruited to quell violence, including The Economic and Financial Crimes Commission (EFCC) and The Independent Corrupt Practices and other Related Offences Commission (ICPC).

Barrister Festus Okoye, the National Coordinator of the Independent Election Monitoring Group, told VOA "these two institutions are more beholding to those in power and used more or less as 'attack dogs' by those in power against their opponents and enemies."

Some are concerned police and security services could be used to manipulate the vote or the counting of ballots.

Dasuki said the leading presidential candidates and their parties recently came together in Abuja to promise to curb the use of hate speech and work towards a free and fair election. And he said a public education campaign called Ballots without Bullets is warning citizens, and especially young people, to condemn calls for violence by partisan groups.

As a result of these efforts, Dasuki says the 2015 elections are expected to be relatively peaceful and free of violence.

Dasuki also addressed criticism of Nigeria’s military – a institution which is crucial to providing security especially in areas destabilized by Boko Haram. It has lost ground to the Islamic terrorist group and has also been accused by critics of human rights violations against civilians.

Some complain that military morale is low; others say corruption and mismanagement have failed to keep troops well trained and supplied with weapons.

Dasuki disagrees. He said, for example, that some, whom he labeled “cowards,” joined the military for jobs, but do not want to fight.

He said someone complained to him that the military failed to hold the town of Baga against Boko Haram a few weeks ago because the troops did not have sufficient weapons.

Dasuki looked into the allegation.

"I sent him the list of equipment that was [captured] in Baga, including artillery guns that were lost in battle. There were six APC’s [armored personnel carriers] with at least 4,000 rounds of ammunition inside [in each]. So anybody who leaves that [material behind] and says he’s not well armed is not saying the truth. "

"There was another complaint," he continued, "about allowances not being paid and a few people complained. [But] I told the president that it’s not the individual who is paid, it’s the unit. Now, if the unit is not paid it is not two people who will complain; it’s the whole unit that will complain. When you don’t have a complaint from the whole unit, [this tells you] it is not true. We have people who give every excuse not to fight; if you don’t want to fight, get out of the army.

Dasuki said the military, which is made up of volunteers, is introducing a system of recruitment and advancement based on merit that will produce a more professional force.

He said challenges remain: the government needs to improve the timely procurement of weapons and adjust to a shift from conventional warfare to what he calls asymmetric warfare in towns and cities teeming with civilians.

That effort to adjust to changing circumstances includes a new doctrine that will outline how the military relates to civilians, especially in situations of counterinsurgency.