Update Required To play the media you will need to either update your browser to a recent version or update your Flash plugin.
By VOA
Aug 30, 2018

Since April, the United States has elicited approximately $300 million in contributions and pledges from Coalition partners to support immediate stabilization and early recovery initiatives in areas liberated from ISIS in northeast Syria, including a generous contribution of $100 million by Saudi Arabia and $50 million by the United Arab Emirates. 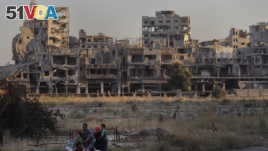 People ride their motorcycle by damaged buildings in the old town of Homs, Syria. (Aug. 15, 2018)

As a result of these generous contributions and other factors, State Department Spokesperson Heather Nauert announced, “the U.S. will redirect 230 million dollars in stabilization funds for Syria which have been under review.”

“This decision does not represent any lessening of U.S. commitment to our strategic goals in Syria,” stressed Ms. Nauert. President Donald Trump has made clear that the U.S. is prepared to remain in Syria until the enduring defeat of ISIS, and the U.S. remains focused on ensuring the withdrawal of Iranian forces and their proxies. “We believe,” said Ms. Nauert, “that neither of these events will happen without irreversible progress toward a political resolution of the conflict in accordance with UN Security Council Resolution 2254.”

The U.S. will also continue to work with its international partners towards the achievement of a peaceful resolution of the Syrian conflict under an UN-led political process. The Syrian people deserve a country free of war, human rights abuses, and terrorism.