Update Required To play the media you will need to either update your browser to a recent version or update your Flash plugin.
By Ray McDonald
Feb 17, 2017


This is the Top Five Countdown! We're rewarding the five most popular songs in the Billboard Hot 100 Pop Singles chart, for the week ending February 18, 2017.

Welcome to our post-Grammy countdown, which sees “nearly” all the artists participating in the big weekend.

The Chainsmokers and Halsey weaken two slots, as their former 12-week champ “Closer” falls to number five. Grammy night proved turbulent for the duo: on the positive side, they won the Best Dance Recording trophy for “Don't Let Me Down,” featuring Daya. They drew the wrath of some David Bowie fans, however, by accepting the Best Rock Song award for the late rock legend's composition “Blackstar.” 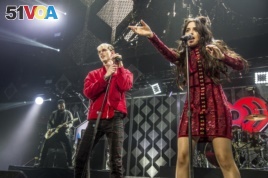 Holding in fourth place are Machine Gun Kelly and Camila Cabello, who marked a milestone on Sunday when Cabello made her solo red carpet debut at the Grammy Awards. It marked her first such appearance since leaving Fifth Harmony on December 18. She also presented the Best Country Solo Performance Grammy, which was won by Maren Morris for “My Church.”

One of Grammy's biggest stars was missing in action Sunday...

Last year, Swift took home three Grammy awards, including Album Of The Year for 1989. This year, she had no nominations – for the first time since 2011. Swift was one of the highest-profile Grammy no-shows, along with Justin Bieber, Drake and Kanye West.

Grammy weekend didn't go so well for our runner-up act: Migos and Lil Uzi Vert lose their singles lead as “Bad And Boujee” falls a slot to second place.

Grammy weekend was an adventure for the Atlanta rappers: it started when group member Offset was kicked off an airliner for refusing to stop talking on his phone. Hours later, police raided Migos' pre-Grammy party in Beverly Hills. TMZ reports that a number of guests reportedly received citations, but it's unclear whether Migos will face any legal action. 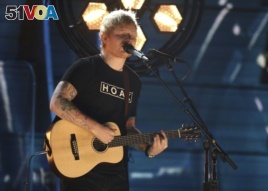 Only one of our Top Five artists performed at the Grammys, and he turns out to be the one wearing the crown. Ed Sheeran returns to the Hot 100 summit for a second total week with “Shape Of You.” He performed that song on Sunday at the Grammy Awards telecast. Last year Ed won two trophies; this year he failed to collect on his sole nomination: Song Of The Year, for “Love Yourself.”