Update Required To play the media you will need to either update your browser to a recent version or update your Flash plugin.
By VOA
Sep 23, 2017 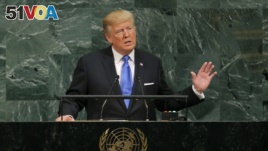 Speaking to the U.N. General Assembly, President Donald Trump described the present day as one of great danger and great potential. Success, he said, “depends on a coalition of strong and independent nations that embrace their sovereignty to promote security, prosperity, and peace for themselves and for the world...And just as the founders of this body intended, we must work together and confront together those who threaten us with chaos, turmoil and terror.”

Chief among them, Mr. Trump said, is the regime in North Korea, responsible for the deaths of millions of its citizens, and which now recklessly pursues nuclear weapons and ballistic missiles. Mr. Trump underscored that all options remain on the table, and that denuclearization is the only acceptable future for North Korea. He stated that it is up to the member states of the UN, he emphasized, to “work together to isolate the Kim regime until it ceases its hostile behavior.”

Mr. Trump warned that Iran must not be allowed to continue destabilizing activities; nor can we “abide by an agreement, if it provides cover for the eventual construction of a nuclear [weapons] program.”

Iran's people are the longest suffering victims of the regime. “Rather than use its resources to improve Iranian lives,” Mr. Trump noted, “its oil profits go to fund Hezbollah and other terrorists that kill innocent Muslims and attack their peaceful Arab and Israel neighbors...It is time,” said President Trump, “for the entire world to join us in demanding that Iran's government end its pursuit of death and destruction.

ISIS, the criminal regime of Bashar al Assad, the humanitarian crises in the Middle East and Africa, and the demise of democracy in Venezuela are among other threats. However, President Trump said, “The powerful people in this room, under the guidance and auspices of the United Nations, can solve many of these vicious and complex problems...It will take a world of proud, independent nations that embrace their duties...respect others, and make common cause in the greatest shared interest of all – a future of dignity and peace for the people of this wonderful Earth.”