Update Required To play the media you will need to either update your browser to a recent version or update your Flash plugin.
By VOA
Apr 9, 2017


By a unanimous vote on March 31, the UN Security Council adopted a resolution extending the mandate of MONUSCO, the UN peacekeeping mission in the Democratic Republic of the Congo, for another year.

The Security Council also lowered cap on the number of UN troops deployed in the DRC from 19,815 to 16,215. In addition, the resolution allowed for the replacement of some troops with more highly trained, specialized units, and included specific performance indicators for troop-contributing countries, to be reported on by the Secretary-General.

The resource-rich DRC has suffered from rampant corruption and violent fighting between dozens of armed factions, resulting in the deaths of an estimated 5.4 million people since 1998. In addition, there have been 107 fatalities of peacekeepers in the DRC since 2010, including nine in 2016 alone. In March, two members of the DRC Group of Experts, one from the United States and one from Sweden, along with their Congolese interpreter, were found dead in Kasai Central Province, serving as a reminder of the continued threats facing UN personnel in the DRC. 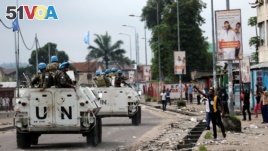 U.S. Permanent Representative to the UN, Ambassador Nikki Haley, applauded the Security Council's renewal of the MONUSCO mandate and for its action to make the mission stronger and more effective.

“When we look at these peacekeeping missions, what we need to focus on is...not the number of people we have on the ground, it's the quality of the work that's happening on the ground,” she said. ”We can have thousands and thousands of troops, but if they're not really working to keep the Congolese safe, none of that matters.”

Ambassador Haley said she was pleased that the Security Council, along with the troop ceiling, “made sure that where the troops are, [they] are actually going to be more effective.” The key, she added is “to make sure that the elections are safe, to make sure we're keeping people safe.”

The most important priority must be the protection of civilians, Ambassador Haley emphasized. Of great assistance in that, she said, is holding troops accountable for their actions. She welcomed the Security Council's request for a strategic review by September 30.

“What we can't do is walk away...and say our job is done,” Ambassador Haley said. “What we need to do is keep looking and making sure that what we did is actually working and effective and meeting [our] goals.”