Update Required To play the media you will need to either update your browser to a recent version or update your Flash plugin.
By VOA
Apr 27, 2017


The United States-Japan alliance is the cornerstone of peace, prosperity, and freedom in the Asia Pacific, said Vice President Pence on his recent visit there. “Under President Donald Trump, the United States stands unwavering in our alliance and unyielding in our resolve to defend all that we have built together over these generations.”

“The United States will strengthen its presence in the Asia Pacific,” said Mr. Pence. “Japan will assume a larger role and responsibility in our alliance in the years ahead, and both of our nations will continue to expand our cooperation for our common defense.”

“Together,” said Mr. Pence, “we will defend the rules-based order upon which the region's progress, past and future, depends. We will protect the freedom of navigation and overflight and other lawful uses of the sea, in the South China Sea and elsewhere, and we will ensure the unimpeded flow of lawful commerce on the Seven Seas.”

Even now there storm clouds are gathering in the region as regards North Korea's pursuit of nuclear weapons. It “is the most dangerous and urgent threat to the peace and security of the Asia Pacific,” said Mr. Pence.

For more than two decades, the United States and its allies have worked to peacefully dismantle North Korea's nuclear program and alleviate the suffering of its people. But at every step of the way, North Korea answered these overtures with willful deception, with broken promises, and nuclear and missile tests. 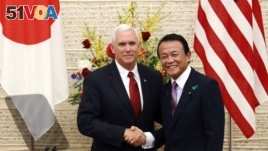 As President Trump has made clear, the era of strategic patience is over.

The United States will continue to work diligently with Japan, our allies across the region, China, and the wider world to bring economic and diplomatic pressure to bear on the regime in North Korea, and we will do so until they abandon their nuclear and ballistic missile programs, said Vice President Pence.

In the meantime, all options are on the table.

And those who would challenge American resolve, said Mr. Pence should know that the U.S. “will defeat any attack and meet any use of conventional or nuclear weapons with an overwhelming and effective American response.”

The United States of America will always seek peace, but under President Trump, the shield stands guard and the sword stands ready.